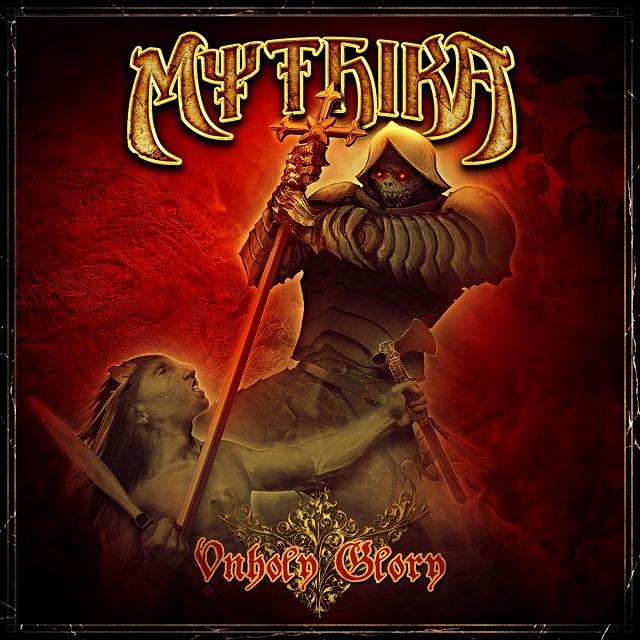 Digging through what’s left from 2022 – Paraguay metal unit Mythika released their sophomore album Unholy Glory – following 2011 debut 1811-2011. Formed in 2006, they issued their first demo in 2007 and a single in 2014 and 2020 before unleashing this gargantuan hour long effort. The band like to focus on history so Unholy Glory is a concept focusing on the conquest and colonization of America from the native’s point of view. Mythika strike forth with heavy/power metal that will remind of Virgin Steele, Judas Priest, and Primal Fear.

Julio Franco (no, not the former baseball player) leads the way with a growling vocal delivery and reminds of David DeFeis in certain instances. There’s much strength in his voice and he carries the way, impacting the emotions of the story and brings a smooth, clean delivery in the slower moments of “Burnt Paradise”.

Mythika has a knack to let a song flow and see what happens. There are staggering, unexpected transitions – the riffs and soloing go from a steady trad metal backdrop to thrashing and then erupt in a power metal flourish and it mostly works. “In Fire Reborn” and almost 10-minute closer “Eternity Awaken” take all these twists and turns and it’s absolutely crazy, especially with “In Fire Reborn”.

Three transitional pieces are interspersed and each explode into fiery guitars – with “Believe” resembling Sabbath classic “Children Of The Grave”, while “Soulpaths” excels with the cultural influence and the motivating chorus.

The one main issue Unholy Glory has is that it throws a lot at the listener and it can be overwhelming at times as it seems like the band is trying to constantly outdo themselves. With that said, this is a fulfilling album with inspired performances and writing. Be sure to check these guys out.