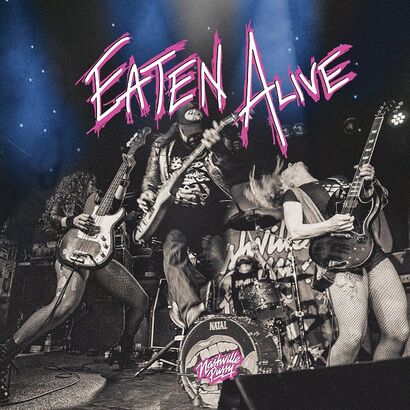 Recorded live during Nashville Pussy’s 2018 UK tour in venues across England, Scotland, and Wales, Eaten Alive is 74 minutes of down and dirty rock ‘n roll – the type your mama warned you about! 19 hot and sweaty songs, comprised of 15 ass-kicking originals and four, leave it all on the floor covers, this CD / double-vinyl jaw-droppingly brings the concert directly from the stage into your humble abode, or wherever the hell you’re cranking this, cause it must be played loud for maximum enjoyment!

Kicking it all off with a raucous rendition of “Kicked In The Teeth” by AC/DC, vocalist / guitarist Blaine Cartwright, guitarist Ruyter Suys, bassist Bonnie Buitrago, and drummer Ben Thomas throw finesse right out the window! Their latest studio release, Pleased To Eat You, gets the most attention with five songs from that platter aired, including the incomparable “Go Home And Die”, as well as a killer version of Steve Earle’s “CCKMP”.

“Low Down Dirty Pig”, which usually runs a brief but bruising two minutes, is extended to ten and a half with the inclusion of a drum solo (that could have been edited out), and band intros. Fear not though, as Nashville Pussy quickly get back on track with crowd pleasers ‘Go To Hell”, “I’m So High”, and “Why Why Why”. It’s unfortunate that “Come On Come On” from the 2005 album Get Some! didn’t make the setlist as it’s more popular now than it’s ever been, thanks to Peacemaker on HBO Max. But who knew back in 2018, that in 2022, wrestler turned actor John Cena would portray a superhero in a hugely successful show, and that Nashville Pussy would be such an integral part of the soundtrack?