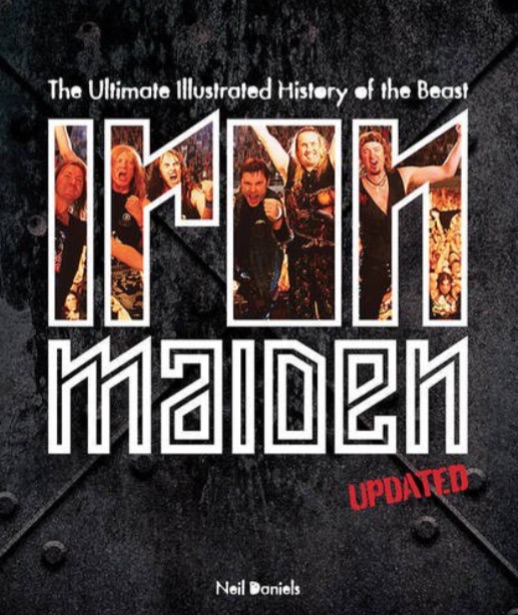 Being a looonngg time Maiden fan - a 13 year old fanclub member in the early ‘80s (even still have a couple of the Christmas cards to prove it), still own every 12” single from the first album up through Brave New World, and my denim jacket painted with the Live After Death artwork – I can tell you this book is well worth owning. For starters, it really has been updated, even including the poster from Maiden’s appearance at the Barcelona Rock Fest and Book Of Souls tour in 2016. The book is well organized by chapter, starting at their beginnings 1975-78 and their formation, following the various lineups and coinciding albums and tours.

As you read through each chapter, you will learn about the recording of each album, their singles, the lineup, setlist and dates for the tour, and band photos. There is even a picture (but no explanation, which I was always curious about) of a rare button from the ‘80s for Killers, where Eddie is actually an iron maiden – with breasts and spiked mallet instead of the hatchet. A button I still own on my denim jacket.

Along with all of the information and images, several known journalists, like Martin Popoff, include a section of commentary about each album, and their success or lack thereof. There is even a torturous picture of the Eddie Rips Up The World setlist (also known as the Early Years to coincide with the DVD of the same name), played mostly overseas, and for a short run of Ozzfest US dates. I say torturous because aside from the Somewhere Back In Time and Maiden England revisited tours and a select handful of tunes, is the only time Maiden play a bunch of different songs from the ‘80s, other than the usual 5-6 classics from the ‘80s. Hoping a professionally shot concert of this tour gets released someday. Author Neil Daniels even includes a Where Are They Now? about past members.