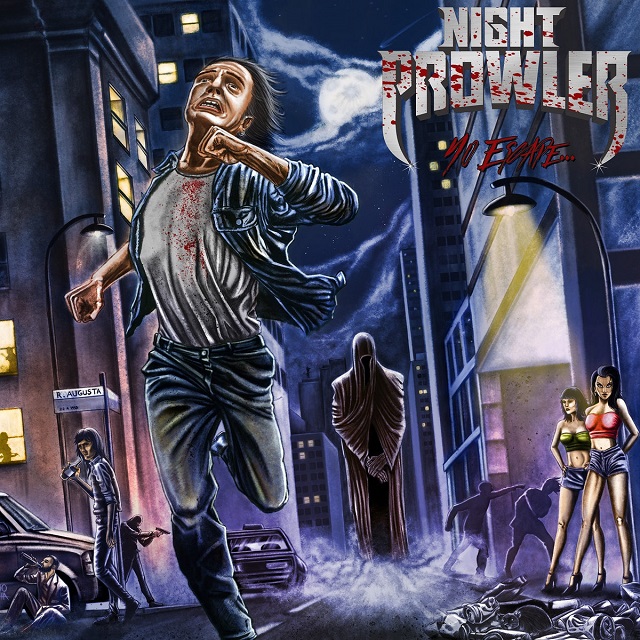 Global release of their debut, which came out in their Brazilian homeland, on Kill Again Records, before the pandemic. Sadly, don't hear too many bands like this in 2021, everyone trying to sub-divide their sound into the perfect mini-genre. Night Prowler opt for a (naivety?) of the early-‘80s, preferring to issue different songs that may fall outside any specific demographic, apart from "metal".

A kitschy keyboard instrumental ("Runner 97T") graduates into a shredding guitar, to start, but "Make It Real" is the first real tune. Upbeat, with clean singing and tuneful melody, much like all the others that follow. Boundless energy, moving on to "Never Surrender", a frenetic, almost speed metal delivery (and the first glimpse of an English language/enunciation issue). Although only 4:20, it's toward the lengthier end of the Night Prowler catalog, but still opportunity to highlight speedy fretboad tricks.

On the opposite pole, the band's signature tune is a slow mover, one of only two inclusions to exceed five minutes. Still a quality construction, with keyboard support too. Odd choice for a signature moment, since it appears to be diametrically opposed to what the band are about. Oh well... "Out In The Streets" gets the ship back on course: a staccato riffing, high pitched vocal fist pumper, in the early Alcatrazz mold. Easy to sing along, the titular phrase repeated, and oft. A dual guitar workout opens the 2:41 instrumental, "The Witches Curse", then morphing into a blazing display of digital dexterity.

Not sure about a title like "Love Hard Girls", in 2021. It returns to the slow chug of the earlier namesake track, but even this one's performed with a little fire. It's only around for 3:30, even with an abbreviated six-string highlight, still not the Prowler's strongest suit. A little VH drum accent to kick off the otherwise Maiden-inspired galloping of "Burning Desire". The album's title cut screams "speed" from the word go! In employs a second, deeper voice, in concert with Fernando Donasi, who handles the bulk of the vocals. The album closer, "Stranger" is a lengthy (6:03, nearly twice as long as some other inclusions) and ambitious number that meets with mixed results. Initially, it's the old crackle of vinyl, as a flamenco acoustic guitar solo graduates into an ‘80s synth soundtrack (albeit still with room for a guitar flourish, or two).

Guess it was best to leave it until the end. Hopefully new material is on the horizon, but the guys profess to avoid the modern conveniences of the digital world, working like bands did, ages ago.