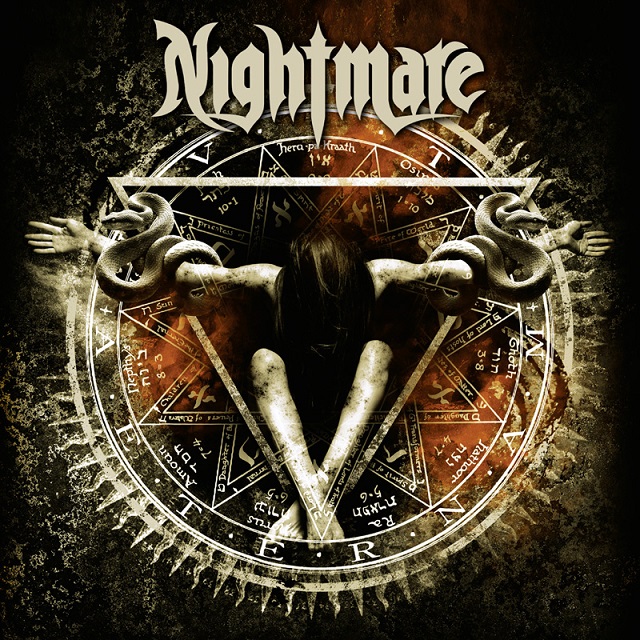 This French band has a long on again off again history that goes back to the ‘80s with two albums, hiatus until an EP in 1999, five albums in the 2000s, plus several member changes over the years. Now in 2020, for new album Aeternam, they are joined with a female voice by Madie (Faith In Agony).

“Temple Of Archeron” begins the album with these fuzzy almost black metal distant riffs, transitioning into more pronounced metal riffs, pounding drums and bass, Madie’s voice separated and clear amongst the heaviness. Nightmare is a little bit of everything from metal genres, some black metal riffing mixed in to the power with big vocal and harmonies for the chorus. “Divine Nemesis” charges forward like 2000’s metallers Brainstorm, Tad Morose, and Morgana Lefay, aggressive verses, merging traditional and power metal to the chorus. “The Passenger” has balls, big strong backing vocals and Madie getting gritty in tone. Keys bring an accent to “Downfall Of A Tyrant”, lets the vocal breathe among the music, and the change pre solo is an excellent Nevermore meets, Iced Earth, and Dimmu Borgir without losing the melody. Excellent opening to “Crystal Lake” carrying into the arrangement, moody and haunting, clean guitars and Madie’s voice shines.

At the halfway point, “Lights On”, the creative juices and energy don’t lose steam, with that bridge and hook this song should be on American radio. Oh, and that solo section is smoking too. Title track is a rager and the heaviest among the ten, followed by a slowed pounder “Under The Ice”. The title track includes slashes of black metal vocal accents and orchestration, sits in a nice groove and closes the album strong. Front to back enjoyable. For fans who want their metal aggressive and punchy, yet with melody in the music and singing.