OBITUARY - Dying Of Everything 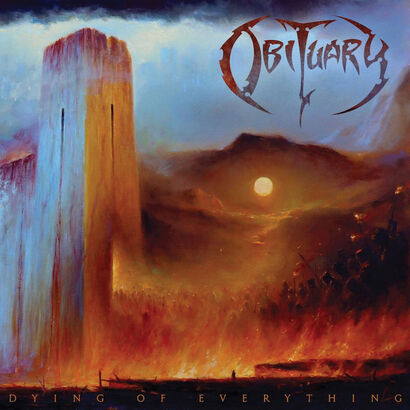 “I’ll take you to war…” John Tardy gurgles not so gracefully, which is everything you need when fighting through a new Obituary record which was conceived, crafted and sent crushing towards us survivors of the COVID-19 pandemic. Album number 11, appropriately-titled Dying Of Everything, sees the band perfecting the groove that they started to lay down with this current line-up on 2014’s Inked In Blood. And there is no warning shot. Lead-off track “Barely Alive” will scare the living hell out of you, the Floridians wasting no time to set the tone in 2023 with a death-defying, thrashing twister.

A few years back Donald Tardy told me this story: “We knew when we wrote ‘Visions In My Head’, it was one of the catchiest songs we’ve ever written in our lives. If John's voice wouldn't have scared the world of commercial radio, I think we would've gotten a bite and commercial fans would've liked it.” And Obituary manage to take a stab at commerciality again with “The Wrong Time”. Don’t get me wrong, this is still vicious death metal, but with a groovy twist and chorus that keeps churning in your brain. The title track “Dying Of Everything” is maniacal and menacing as the greatest voice in death metal history delivers his lesson in verbal violence. John kills you as you die of everything.

“Weaponize The Hate” gives a nod to marching mechanics of The End Complete, while closer “Be Warned” sees the pace reduced, bassist Terry Butler and drummer Donald Tardy deliver steady blows to the head, while guitarists Trevor Peres and Ken Andrews duel madly. The tongue-in-cheek title and complimenting artwork can be a visual summary of the past two-plus years on this dying planet. Dying of everything.