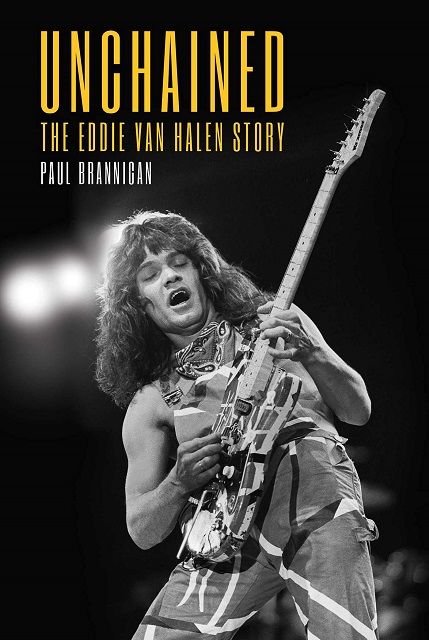 London-based Irish author / journalist Paul Brannigan is a former editor of Kerrang! and Planet Rock magazines, currently contributing to Classic Rock and Metal Hammer, he’s also written books on Dave Grohl, Metallica, and Lemmy Kilmister. Now, Brannigan has crafted a 266-page hardcover, touted as “the first full-length biography of Eddie Van Halen.” Truthfully, it’s just another biography on Van Halen, the band, as vocalists David Lee Roth and Sammy Hagar each receive as much attention as the beloved guitar god. “Pairing original interviews with meticulous research,” Brannigan acknowledges that he only met Eddie Van Halen once, at his 5150 Studio inside his Los Angeles home in 1998.

In fact, the author pulls so heavily from both Roth and Hagar’s autobiographies, as well as Van Halen Rising by Greg Renoff, Everybody Wants Some: The Van Halen Saga by Ian Christie, and Runnin’ With The Devil by Noel Monk, that if you’ve read those excellent books, there really is no need to pick up Unchained, as there’s very little in the way of unfamiliar material. Furthermore, Brannigan relies extensively on quotations from articles in Guitar World and Guitar Player, as well as Billboard, Rolling Stone, the Los Angeles Times, and the New York Times.

Brannigan calls Eddie Van Halen, “hard rock’s own Peter Pan, a free-spirited soul who never grew up but learned how to fly.” Eddie’s story, minus any photographs, runs chronologically from taking piano lessons at age five, leaving The Netherlands for The United States at age 7, all the way up to his tragic passing in 2020 at age 65. All the milestone events along the way – both good and bad – are documented, albeit briefly, including the infamous backyard parties, early club days, Eddie’s unparalleled musical ability, his excessive drinking and drug abuse, and the infamous “No Brown M&M’s” clause. Eddie’s marriage to actress Valerie Bertinelli, his work with Michael Jackson, and the lineup changes within Van Halen all get cursory coverage. An unfortunate lack of insight pervades throughout as Eddie’s relationships with his brother / drummer Alex Van Halen, and bassist Michael Anthony, are barely explored.

For the casual fan, those who aren’t well versed in the lore of one of America’s greatest rock bands, this is a quick and easy read. But for the enamored, who know their Van Halen history, the story of “Eruption” and everything that followed are told in greater detail elsewhere.