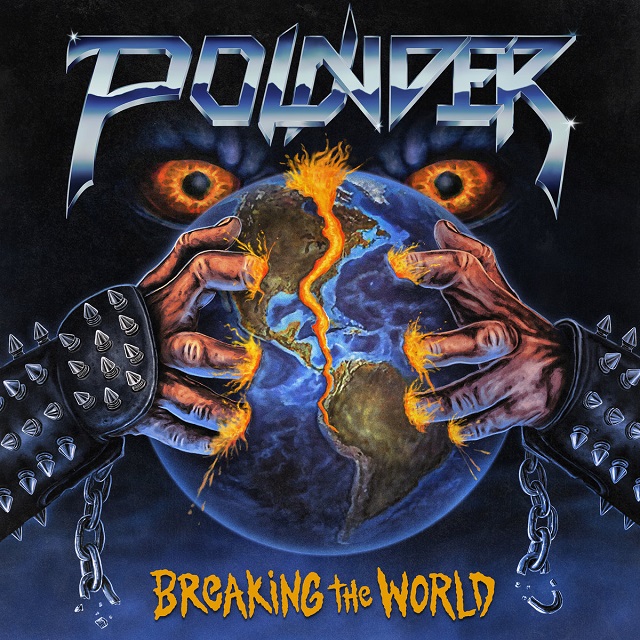 This trad metal supergroup of sorts returns with their sophomore album, Breaking The World, and builds upon the debut with a more focused effort, a better mix, and hard-hitting songs that leaves listeners wanting more. What makes Pounder interesting is the band members are a trio of death metal vets – Exhumed / Gruesome’s Matt Harvey on guitars and lead vocals, Carcass’ Tom Draper on lead guitars, and Nausea’s Alejandro Corredor on bass. Not sure who’s behind the kit, could be a drum machine?

Instead of death, destruction, and horror-based lyrics, Breaking The World is straight-ahead, throwback, good time heavy metal with some overt touches of glam, especially in the choruses. Harvey is much more confident behind the mic this time around, utilizing a throaty, clean voice that was buried in the mix on the debut that was also hindered by some strained notes. “Hard Road To Home” is pure heavy metal bliss with one of the catchiest choruses one will ever hear. Accompanied by bright, gang vocals, it’s a fiery tune with driving riffs and stands amongst the pack. Pounder successfully balances out the hard ‘n’ heavy with the shades of glam that Enforcer did so well up until running too much in the latter direction on their last album. “Never Forever” details a failed relationship and once again am taken aback by the strong chorus. Accented with the use of synths the leads are full of power and strength that build forth to glorious melodies. Draper and Harvey let loose on the guitars and they are similar to Haunt with their skill and ability to create memorable solos. “Hard City” reminds of Dokken, except heavier, especially in the mid-section, but that accessible chorus is there and it’s a great example of what made ‘80s metal so great. “Give Me Rock” comes with a Ratt swagger; could easily see Stephen Pearcy nailing this tune and “Deadly Eyes” closes this 35 minute album on an untainted, speed metal note. Top-notch, must have heavy metal; don’t pass this one up.