POWER PALADIN – With The Magic Of Windfyre Steel 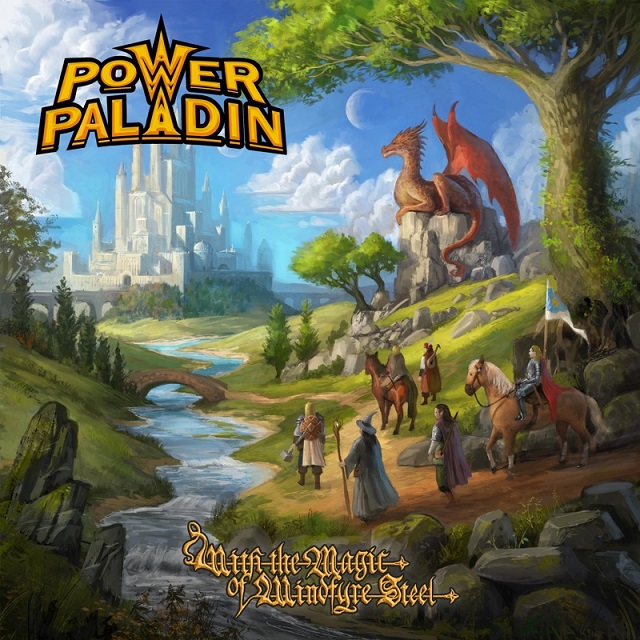 Icelandic power metal machine Power Paladin come out firing on their debut full-length, With The Magic Of Windfyre Steel. That title is a mouthful and reeks of Euro fantasy power metal and that’s exactly what it is with the PP diving unashamedly into nerd/geek culture with up-tempo, smiling metal.

They also have no shame into copying other bands – the main melody in opener “Kraven The Hunter” is taken right from Iron Maiden’s “The Sign Of The Cross” – if you can ignore that, the song is energetic with an unexpected flamenco solo in the middle section. It’s hard not to compare this band to Helloween, “Righteous Fury” (bonus points for playing The Legend Of Zelda theme in the solo) and “Way Of Kings” could be outtakes from the Keeper-era.

Singer Atli Guðlaugsson has some Michael Kiske in him, but he’s more nasally in tone and doesn’t hesitate going for the highest of the high notes (check out the vocal gymnastics on the chorus to “Way Of Kings” and “There Can Only Be One”). Easy to tell the band had a fun time creating the music with its jubilant, bright atmosphere.

Power Paladin are best when they don’t go the conventional route – “Dark Crystal” has a progressive bent to it with aggressive guitars (reminds of Abbath’s I) and fun interplay with the keyboards while closer last two track “Into The Forbidden Forest” and “There Can Be Only One” shine a bigger scope with longer song structures and a stronger use of the keyboards, while introducing symphonic instrumentation. They don’t overshadow the guitars thankfully, as the rhythmic instruments are still at the forefront. “Creatures Of The Night” has an incredibly infectious chorus; would be great in a live setting.

A fun debut and glad to see the success they are having with it. This is power metal comfort food, but in the future would like to see a tad more originality and increase the scope of their songwriting. They clearly have the chops and talent and European power metal fans should take notice.