POWERWOLF - Call Of The Wild 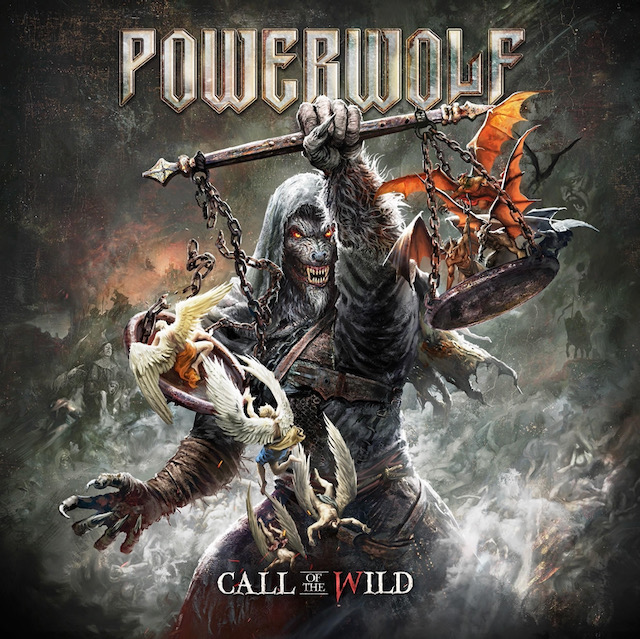 Big record (in more ways than one) for the religious-baiting werewolves from Germany. Already stadium headlining talent in their homeland, they're on the precipice of international stardom (if they want it: still refuse to play North America), although no overseas deference has been undertaken. The eleven song disc is packaged (in deluxe edition) with either a second/or third offering. The first is an ingenious use of the music biz Covid shutdown: having known stars, from other bands, take a stab at established Powerwolf material. Brilliant idea with crossover/new fan potential. A separate, symphonic take on the main album, is also available.

A pair of pre-release singles showed the Wolves set to stretch their wings (wait, wolves with wings?), especially the lively, seeming ripped from the Sabaton musical cannon, "Beast Of Gévaudan" (even the foreign locale reminds you of the Swedes). Lest one get worried it's all new leaves overturned, there's "Undress To Confess", which walks similar wink-wink/nudge-nudge territory to that of earlier albums (a few of which are covered on the All-Star platter). Such eye-poke sentiments are probably what has kept them from being confronted by the over-zealous (and humor lacking) Christian fundamentalism is the USA (ie, the lack of gigs).

An orchestral crescendo is the first notes heard and eventually the guitars kick in, but the classical instrumentation is present throughout "Faster Than The Flame": a simple, repetitive ear-worm that segues into the aforementioned pre-issued single. In fact, the symphonic instrumentation is an overriding presence through the disc (thus the third, optional incarnation is not really a stretch, nor, to these ears, necessary), which will surely mean copious backing tapes for live shows. Case in point, bouncy "Dancing With The Dead", which was the follow-up (although still prior to street date) video track. Liturgical keyboards dominate "Varcolac", where a choir of voices sings in Latin. Chanting priests and a lone keyboard briefly introduce "Alive Or Undead". A ballad, it's almost completely devoid of the orchestration that has heretofore accompanied each cut, Attila Dorn is basically laid bare (nearly a cappella).

A Celtic melody surrounds "Blood for Blood (Faoladh)": fitting since Faoladh is an Irish werewolf, differing from their continental European cousins by less savagery, or so they say. "Glaubenskraft" (power of faith) retains all the church sound effects that have long adorned Powerwolf, although this track is sung in German. The title cut is a fast mover, the titular chorus sure to be a concert shout, in no time. Another multi-sex choir kicks off lively "Sermon Of Swords", but then stays out of sight (earshot?) on this, another "convert or submit" historical-based tale. More keyboard pomp for "Undress To Confess", a tongue-in-cheek look at how the church abused their, eh position (power?). There's liturgical musical underpinning, as well as the reappearing dual-sex chorus. Only "Reverent Of Rats" can follow such a storyline. Infectious way to close the album. Even after the initial run-through, by album's end, the orchestration was either 1) diminished or 2) became less noticeable and truly ingrained into the structures. Repeated listens, even more so.

Now, let's take a look at the extra cuts. There's some danger in having the more direct/metal counterpoints to the new approach so close at hand. Initial pre-release teaser was Arch Enemy singer Alissa White-Gluz handling "Demons Are A Girl's Best Friend", adding some husky voice to an otherwise campy number. It's presented second in the running order, behind Primal Fear's massive air raid siren Ralf Scheppers taking on "Sanctified With Dynamite". Apart from a few high pitched accents, would be hard pressed to identify his trademark vocals though.

Speaking of hulking vocals, check out Amon Amarth's resident Viking, aka Johan Hegg, laying down "Nightside Of Siberia". What was a synth pop sound, originally, has become a thunderously punishing Russian march melody. Doro Pesch enjoys collaborations and here, she tackles "Where The Wild Wolves Have Gone", melding it into a glorious Doro ballad (OK, not quite "Fur Immer", but not THAT far off, either). Another early release option saw Trivium's Matt Heafy on speedy, riff happy "Fist By Fist (Sacralize Or Strike)". Soilwork/Night Flight Orchestra frontman Bjorn "Speed" Strid offers "Killers With The Cross", employing more of the voice used in his old band, not the suddenly popular disco offshoot. Don't have a reference point for Lord Of The Lost singer Chris Harms' echo-voiced Goth-lite "Kiss Of The Cobra King", but shows the scope of this project. Can almost see the insidious smile across the face of Johannes Eckerström (Avatar), made up, or not, as he unleashes a shouted, rather brutal "We Drink Your Blood". Naturally, Chris Bowes had to go for the likewise over-the-top "Resurrection By Erection", retaining his drunken sea chantey delivery on a otherwise faithful rendition. If any of the participants were to adopt a Powerwolf tune, for their day job, could see Bowes adding this to the Alestorm setlist. Wintersun guitarist-turned-singer, Jari Mäenpää infuses a bit of Broadway into "Saturday Satan".

Seems like all had fun, which remains a hallmark of the Powerwolf world, regardless of musical force. Enjoy!