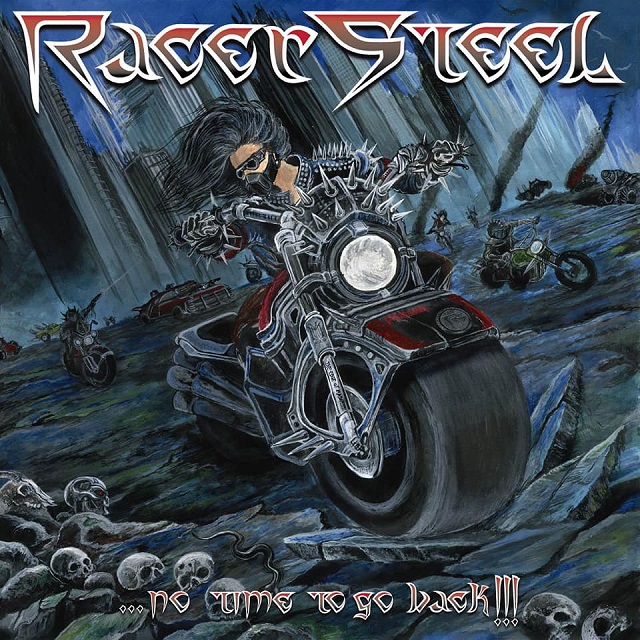 There's a rawness, urgency (and naivety?) to most South American releases, which mimics the vaunted NWOBHM. While this Chilean speed metal outfit, Racer Steel, might not be an exact sonic doppelganger (although they do opt for snippets of the traditional style), there a like-mindedness, created by similar financial constraints (towards rudimentary instruments and recording budgets), youth and a love of heavy metal. There's the same infectious vibe, even if it's not 100% ironclad precision, but who cares?

Subtle, electrified acoustic guitar strumming opens the galloping Maiden-ish "With The Fist High". While the rough-edged vocals of Jonny Ceron Vidal won't be confused with Bruce Dickinson, he does enjoy wailing away like a high-end warning siren! The signature tune, up next, begins with another Steve Harris inspired melody, then ratchets it up to speed metal intensity, with Vidal repeatedly screaming the band's name/chorus at a stratospheric pitch. Switching gears, "Battalions Of Fury" is built around a mid-tempo rhythm (think Dio's "We Rock") and plenty of buzzing guitar riffs. "Blood And Steel" also dispenses with the rapidity quota, but that doesn't stop our leather lunged protagonist behind the mic from caterwauling at maximum volume. The almost laidback approach (compared to its racer, pun intended, cousins) and simple, repetitive chorus, makes it a fist-thrusting, sing-along anthem.

In a swirl of guitars and sky scraping intonations, "Murderer In The Shadows" jumps into the fast lane, right away, sets cruise control until reaching its conclusion. Bashing snare drum and buzzsawing guitars greet "Battle Cry". Grittier guitar tones abound on "Living On The Edge" finale. They only seem to know one (lively) pace, which quickly kicks in, with shrieks courtesy of Vidal. Old school throwback? New breed? Racer Steel have a cross-generational appeal. Good stuff!