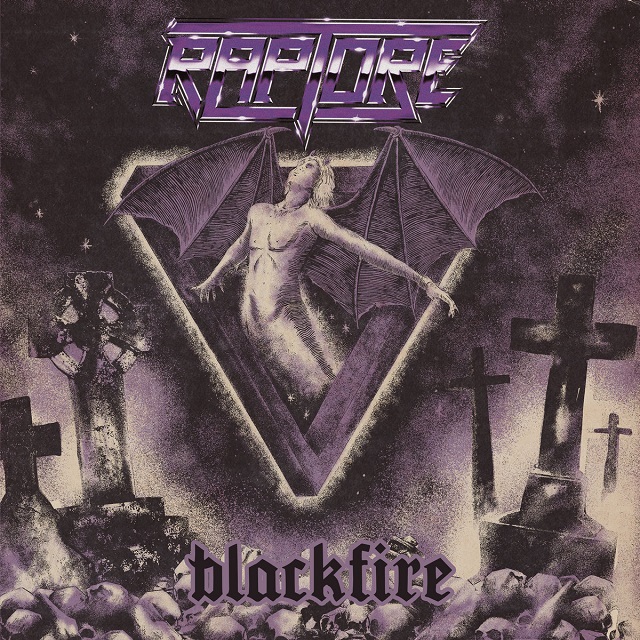 On their sophomore effort (albeit first in six years) Argentinian speed metal outfit, Raptore apparently used some of the intervening time to upgrade members and relocate to Barcelona. They owe Europe more than a just a debt of gratitude, especially likeminded Swedes Enforcer, as the sound is remarkably similar, down to the high pitched (verging on falsetto) vocals of Nico Cattoni. However, with the more established Swedes having "progressed" on Zenith, away from the unabashed approach of their earlier works, there's certainly room for both within the record store racks.

First off, despite the so-called "speed metal" tag, the music (while generally fast) isn't devoid of melody: in fact, most of the seven inclusions are quick study sing-alongs (an eighth cut, "Dirge", is simply an instrumental). Raptore like to get the point across in less than four minutes, with only "Phoenix" eclipsing 5:00 and the entire album whizzes by in 31:24. After a short piano accompanied intro sets the mood, half evil opener "Triumphal March To Hell" (clocking in at 3:33) blazes away, the lyrics spit out almost as fast as Cattori's grip of English allows. There is a sedate break, midway through, but it only lasts long enough to allow the bass and guitars to re-calibrate for the race to the end.

Just a second longer, in length, "Prisoner Of The Night", complete with its "whoa whoa whoa" gang chorus, is the first infectious crowd pleaser, even with the singer's unnatural higher register. Can envision the in-concert crowd thrusting fists, while simultaneously singing the simplistic verses. Winner! The title track is launched in flurry of guitars, as the titular chorus comes from multiple voices. Don't blink, "Devil Ascends" is over in less than 150 seconds: "The Devils ascend, tonight" being the sum total of the repetitive lyrics. It's not about the words, but the delivery and it's balls out, true speed metal, start to finish. Simple, but effective! By contrast, the aforementioned "Phoenix" (the mythical bird, not the city), lasts almost three times as long. There's an extended, subtle bass/drum interlude within (more of a trot, than a gallop and certainly not the full-on racing that's found elsewhere on the disc). Sandwiched between rapid paced, squelching guitars, it's one of a kind.

Bouncy keyboard notes introduce (then disappear) the otherwise Enforcer cloned, quick hitter "Demon's Lust". Another round of catchy, sing-along choruses, a tricky feat for songwriters/lyricists working in a second language, but when done well (like here), definitely one of the perks. Apart from the opening and closing flourishes, more of a mid-tempo outing. The voiceless composition has sound effects (gurgling water?) underneath a lone. Almost classical (acoustic) guitar. Serves as something of an intermezzo for the whiplash inducing finale. The thump of drums begins "Death", as Cattoni's vocals reach the stratosphere once more.

Another, in a growing list, of young acts to watch.