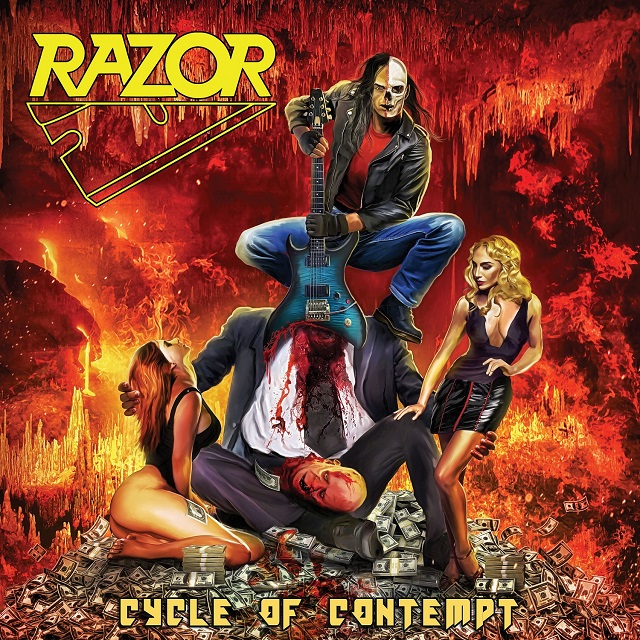 38 years ago as a teenage kid I bought the Armed And Dangerous EP at the Sam The Record Man in Barrie, Ontario. So I’ve been along for the neck brace ride most of my life. The last Razor album was Decibels in 1997, so 25 years … what do you say? We’ve been waiting a quarter century for the follow-up! So there is plenty of pent-up energy to be spent. So strap in and get ready. Messrs. Dave Carlo (guitars), Mike Campagnolo (bass) Bob Reid (vocals) and Rider Johnson (drums) have picked up where they left off. And that’s not saying Cycle Of Contempt is dated. That’s far from the truth. But just like some of the finest bands (you know their names), there is a certain recipe and flavour that suits them. And with the chants of “Razor, Razor, Razor” - while Carlo’s amps are humming like an engine ready to seize a NASCAR victory - “Flames Of Hatred” tells the tale with feisty venom. It’s a raging, speedy affair which will have purists dancing in the pit.

“Off My Meds”, “Punch Your Face In” and “King Shit” are simply dizzying, your head spinning madly while singer Bob Reid wants to tear it right fucking off. But Carlo’s hands are just golden, a wicked wizard shredder that hasn’t aged a bit. And the thundering Campagnolo bass and blasting backbeats of drummer Johnson add another layer of doom and destruction. This ain’t for the faint-hearted.

The title track “Cycle Of Contempt” is classic Razor with a menacing dark riff that keeps stabbing you. And stabbing. And stabbing. “Crossed” is a linguistic lesson in violence. 25 years is a helluva wait, but time has been friendly to Razor. One of Canada’s treasured entities and a serious influence on the extreme metal scene since the early ‘80s. You ask the bands. There has always been respect for Razor.