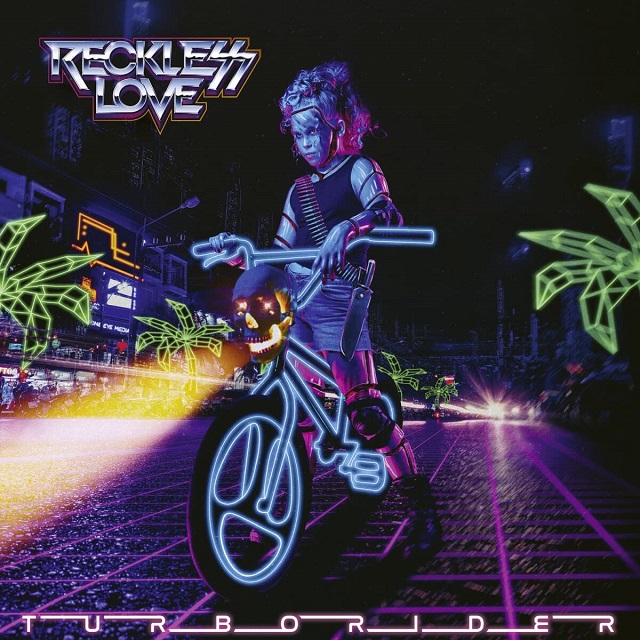 This is going to be a divisive record. Reckless Love dives deep into synth-based, ‘80s retro rock on their fifth full-length, Turborider. Their mission statement stated proudly and defiantly in closer “Prodigal Songs” with charismatic singer Olli Herman proclaiming “we’ve been there, we’ve done that, now let us synth!”

It’s commendable the Finns are 100% in on going in this direction and yes, the guitars take a back seat, but guitarist Pepe still is able to show off his skills and flourishes rhythmically and in loud and proud soloing. Turborider could easily sputter with poor songwriting, but Reckless Love excels at creating this blend of synth-pop metal by keeping the tracks short and to the point. They have always had this sugary side to them (“Scandinavian Girls”, “On The Radio”, “Hot”) and it’s turned up a notch with big and catchy choruses. On the “heavier” side of the coin, opener and title track wears the crown and is unique with this determined, speedy guitar meshing with synth and electric drums. Turning the Ozzy classic “Bark At The Moon” into a synth-based song is also gutsy, but it works, and while it may sound like heresy, the danceable drum beat is hard not to get into.

“Kids Of The Arcade” is like listening to a soundtrack of a classic movie with its motivating lyricism and build up in the verse that explodes into a huge, rocking chorus. Pepe let’s loose on short instrumental “Prelude (Flight Of The Cobra)” which then segues into the burst of fire “Like A Cobra” with its menacing vibe while “Future Lover Boy” is a seductive dance rocker made for the club. The Lover Boys turn it up on a notch with “’89 Sparkle”, drowning in sugar and sweetness with that high-pitched chorus and it’s a little too much with its pop sensibilities. “For The Love Of Good Times” is pure ‘80s cheese that will be an eye-roller for some, it’s that track you listen to with your boys while in the limo partying or sneer at because of its charming rhythm and commercial sensibilities.

Turborider blasts the past into the future and its bold direction is worthy of applause. It’s not what fans are used to hearing from them and some are absolutely going to knock the rider into the ditch, but if any band was capable to make a successful shift like this, it’s the boys from Reckless Love.