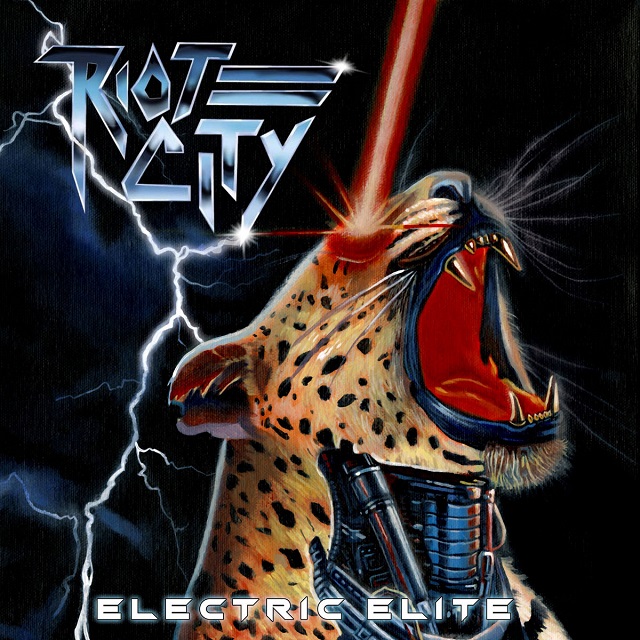 Sophomore effort from stampeding Calgary outfit. The biggest development is that guitarist Cale Savy has relinquished lead vocals to newcomer Jordan Jacobs, as the band expands to a twin guitar quintet! While retaining the high pitched register of the debut (which was my pick, for album of the year, 2019), these eight songs lack the charming off-the-rails performance of that earlier disc. That's not to say the band has mellowed (as anyone who witnessed the Keep It True livestream, or Stormbringer festival gig, can attest). Unlike the last outing, which came tearing out of the box and sort of tailed off, Electric Elite is a grower, the chaos ebbs and flows, with much reserved for the middle of the running order.

Pre-release single/lyric video "Eye Of The Jaguar" introduces things, a frenetic opener seeking to let fans know all is well, despite the line-up upheaval. Crazy tapping and switched leads as Jacobs screams his lungs out. While spirited, "Beyond The Stars" is a slight musical downshift. The vocals are still histrionic, just not as over-the-top as the lead track. The break sees both guitarists involved,trading off "Eruption" styled flourishes. "Tyrant" stomps to a heavy footed plod, complete with gang backing, on the titular chorus. Reminds me of old Malice material (think "Against The Empire" or "Stellar Master"), metal, but not as overly aggressive as one might expect, given the title.

"Ghost Of Reality" is a slow builder, gentle bubbling before taking flight (although it does return to Earth, as opposed to being launched into the stratosphere, on a one-way trajectory). Cool upbeat guitar tune. Fast, gritty guitar to kick off "Return Of The Force". In terms of music and vocals, it's the closest to Burn The Night content. Next up, a like-minded "Paris Nights", accenting the six-strings, but not with shred. "Lucky Diamond" gallops, punctuated by ceiling scrapping vocalizations and a loose, carefree (but never sloppy) meter. Good stuff. The concluding "Severed Ties" is almost 10 minutes long, beginning as jangly, prog rock and only hitting a screeching, mid-tempo common ground a few minutes in. Around this point, start to notice the head bobbing along to the melody, albeit fairly restrained, by Riot City standards. Lengthy instrumental sections within the expanse. Come the end, Jacobs is wailing his head off!

So it's not a carbon copy of what came before, nor is it the dreaded "sellout". Can we say more mature, without pissing off the cvlt contingent? Time for a tour out East!