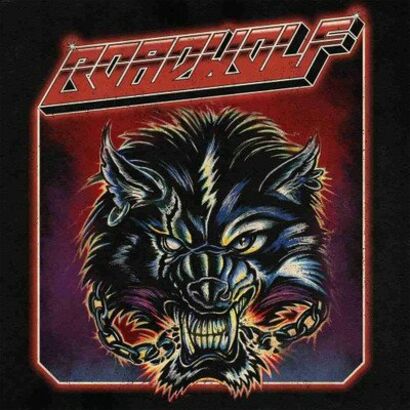 Despite the central European locale, Austria has made little impact in the metal world, thus far. Perhaps that will change, with Roadwolf, a traditional minded outfit who walk the line between old school proto-metal and 70s hard rock. Imagine if Judas Priest (musically, not vocally) resided on the Sunset Strip, in the early days (ala W.A.S.P., Malice, etc), before the hairspray emasculated the late-comers (pun intended). That said, there's a bit of Gonzo Nuge soloing in the hard driving/riffing "Never Surrender".

No, it's not a cover of Biff Byford's bunch, but just one of the recurrent Saxon references within the running order. "Wheels Of Fire" has a NWOBHM vibe (within the lyrics, they even mention wheels of steel). The band has been in existence for almost eight years and about half of these ten tunes have been fine tuned, over time. Screaming guitars leap from the aptly entitled kick-off, "All Hell Is Breaking Loose", a fine introduction, to keep the uninitiated piqued for deeper investigation. The titular follow-up is a bouncy sing-along, before a scream opens the twin leads of Priest-ly pounding "M.I.A. (Missing In Action)". In contrast, the band's signature track descends into a meandering traditional blues tune, occasionally peppered by lively guitar, but otherwise somber.

Continuing the mid-album lull is the lengthy (6:42) and restrained "Straight Out Of Hell". Taking a while to get its motor revving, it merely purrs along, never approaching red line. The first few notes to "Curse Of The Gypsy" heralds a renewed pace, quickly followed by a brief Maiden foray. Overall, repeated listens brought about a Diamond Head feel. 50s rock & roll meets Kix for "Turn It Loose", complete with backing harmonica. Like-minded closer, "Condemned To Rock" (which fades out) has a stripper strut that 80s American bands loved, as does AC/DC. Now if they'd take the limiter off and just go-off, full bore, throughout the album.

Doubtful Roadwolf will get above a certain level, on the international scene, but that doesn't make this debut any less poignant, as a good-time, "remember the old days" (especially during Covid!), fun listen. Fill-er up, I'll have another round.