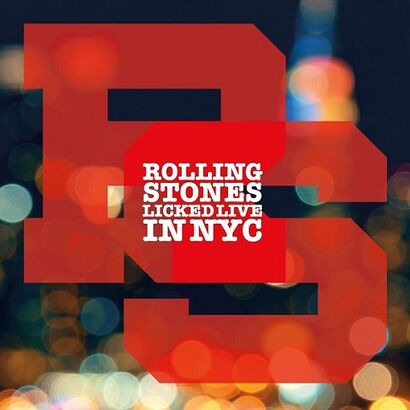 Filmed in January 2003 at Madison Square Garden as part of The Rolling Stones’ 40th anniversary celebrations, Licked Live In NYC originally aired on television as an HBO special. The 21-song set has since been restored and remastered with four previously unreleased live tracks: “Start Me Up”, “Tumbling Dice”, “Gimme Shelter”, and “Sympathy For The Devil”, and is now available as a remarkable Blu-ray + 2CD set. Add in the must-watch bonus footage, and the total running time is just over three and a half hours – what a treat for Stones fans!

Beginning with “Street Fighting Man”, Mick Jagger, Keith Richards, Charlie Watts, Ronnie Wood, and their supporting cast quickly set the tone for an utterly enjoyable evening of classic rock. Jagger masterfully commands the stage, and before long straps on a guitar for “Don’t Stop”. Richards and Wood break out the acoustics for a lovely rendition of “Angie”, which along with a thirteen-minute “Midnight Rambler” jam, beautifully highlight piano player Chuck Leavell. The camera angles are plentiful, and the video editing is excellent, with the backup singers and horn section getting the spotlight in “Tumbling Dice”.

Keef, as he’s affectionally called on occasion, sings lead vocals on “Thru And Thru” and “Happy”, faring much better on the latter. After an awesome version of “Gimme Shelter”, in which Mick duets with Lisa Fischer, “Can’t You Hear Me Knocking” is drawn out way too long, hitting the eleven-minute mark. Surprising those in attendance, Sheryl Crow appears on stage to sing “Honky Tonk Women”; unfortunately, the sax, trumpet, trombone, and keys are too prevalent in this arrangement. Thankfully, “(I Can’t Get No) Satisfaction” brings the focus back to the four central figures. A trip down the catwalk to a small stage at the other end of the arena follows, before the Stones return to the main stage for the finale.

Bonus features include three songs live in Amsterdam, all performed on the B-stage. Two of those tunes, “Star Star” and “I Just Want To Make Love To You” were not included in the New York setlist, and although “Street Fighting Man” is heard for a second time, it’s certainly not a carbon copy. Rehearsal footage is predominantly instrumental, yet casual and fun. If you’ve never seen the Tip Of The Tongue documentary, get ready for an unparalleled insider’s view of the Rolling Stones and the enormous amount of preparation that went into making their Licks World Tour an incredible success. Footage from New York City, Paris, and Toronto is all-encompassing, including a promotional blimp ride, stage design, wardrobe consultation, practice sessions, interviews, and an intriguing exploration into the decades-long relationship between Mick Jagger and Keith Richards.