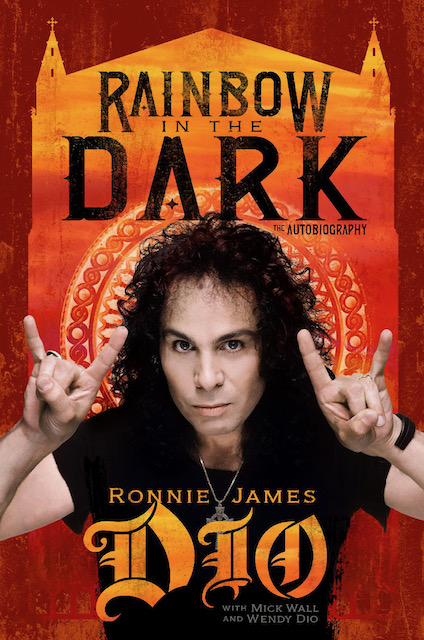 In May of 2010, long before I was a music writer of any kind, my father and I read the tragic and gut-wrenching news that was the loss of hard rock and heavy metal’s most beloved vocalist, Ronnie James Dio, right here on BraveWords. It was one of the first times that I ever saw my father cry. For me growing up, Dio was everywhere, and I think I might’ve been the only ten year old in the 21st century who knew every single word to “Rainbow In The Dark”. Like so many, I still feel the pain every May when we celebrate another anniversary of this tremendous loss. In a way, it feels like Ronnie is still here. All of this is what makes writing the following review for BraveWords, a book chronicling the life of Ronnie James Dio by him himself, so special and something that touches my heart so profoundly.

Since Ronnie’s passing over a decade ago, fans have been long-awaiting the rumored autobiography that was said to have been started by Dio several years prior to his death. In 2021, 11 years after his passing, the autobiography is finally here and goes by the appropriate name: ‘Rainbow In The Dark’.

The book, started by Ronnie, was brought to completion over the last decade by his wife and then manager, Wendy Dio, as well as renowned music writer and long-time friend, Mick Wall. The pair, with the help of what was already written by Ronnie himself, were able to piece together the remaining bits and pieces of Ronnie’s story through handwritten notes of memories that Ronnie left behind, as well as their own observations of events throughout Ronnie’s decade-spanning career. Although it’s left a little unclear how much was previously written by Dio, and how much was altered with the help of Wendy and Wall, it flows together rather seamlessly; creating a full circle take-away in the autobiographies short 240 pages.

‘Rainbow In The Dark’ recounts the entirety of Ronnie’s musical career, beginning with his father’s forceful request to learn the trumpet, all the way up to headlining New York City’s Madison Square Garden with Dio in June of 1986. Although we’ve always been aware of Ronnie’s innate and prolific ability to story tell in his varying musical works over the years including concept records filled with magic and fantasy, this without a doubt carries into his written work as well. From the very first page, you feel as though you were a part of it too; dealing with the trials and tribulations of the first 35 years of his musical career. For many, it’s been an emotional experiencing hearing new thoughts and words posthumously from Ronnie over a decade after his passing.

Although the bread and butter of the book is the insight into Ronnie’s time in Elf, Rainbow, Black Sabbath, and Dio - one of the most fascinating pieces of Ronnie’s narrative revolves around his early years. The beginning of ‘Rainbow In The Dark’ centers around his start in music, his transition from trumpeter to bass guitarist to vocalist, as well as his time in The Vegas Kings, Ronnie and The Red Caps, Ronnie and The Prophets, and Electric Elves; all early incarnations of what would become Ronnie’s first notable project, Elf.

Ronnie describes a wide variety of hilarious instances in his time as a young rock and roller; including reversing his parent’s Buick into a neighbor’s house across the street, getting too drunk and hurling onstage during a gig with his local dance band the Stardusters, and even changing his last name, originally Padavona, to Dio; after mobster Johnny Dio (that almost had him killed might I add)!

The book continues to detail dozens of previously unheard stories as well as Ronnie’s tumultuous departure from Rainbow, his more than rocky relationship with Richie Blackmore, the chance friendship that resulted in what would become mark two of Black Sabbath, and eventually the development of the band of his very own namesake, Dio, that went on to record and produce ten studio records.

One of my favorite stories that Ronnie reveals in ‘Rainbow In The Dark’ is how Dio’s stage show in the early ’80s was inspired by his time in Elf opening for Alice Cooper. It shows the ever-present interwebbing connection of every project Ronnie was a part of. Here’s a quote straight from the book detailing Elf’s experience opening for the shock-rockers:

“The shows with Alice Cooper, in particular, were astounding. This was the original band known collectively as Alice Cooper, but Alice the frontman was already the star of the show. This was also our introduction to glam rock and a much more theatrical presentation for a rock show. Alice was hanged at one show we did with them, and then they upgraded it to electrocution in another. It might sound tame to twenty-first-century rock audiences, but in 1972, this was the first time anyone had seen anything like that. It was the indelible memories of these shows that would later become the catalyst for some of the Dio productions of the ‘80s.”

Unfortunately, not covered throughout ‘Rainbow In The Dark’ is the latter half of Dio’s career and his heartbreaking yet inspiring battle with the cancer that took his life in May of 2010. That time is perhaps the most unclear and unknown by fans, and has been told in varying perspectives over the years from fellow bandmates and friends. Even though Ronnie’s career continued for another 24 years after what is the conclusion of ‘Rainbow In The Dark’, the contents of the book are enough to understand Ronnie’s pure gumption and unadulterated passion for his goals and most importantly his craft.

Along with 240 pages detailing Ronnie’s personal story from Ronnie himself, the autobiography also features a wide variety of never-before-seen photos ranging from every era of Ronnie’s career, as well as his younger days, straight from the Dio archives.

All in all - ‘Rainbow In The Dark’ is truly an inspiring tale of how dedication, persistence, and passion found Ronnie James Dio sitting forever on the throne of hard rock and metal - and that’s right where he’ll stay. We love and miss you, Ronnie. “Look out!”