RUINS OF ELYSIUM – Amphitrite: Ancient Sanctuary In The Sea 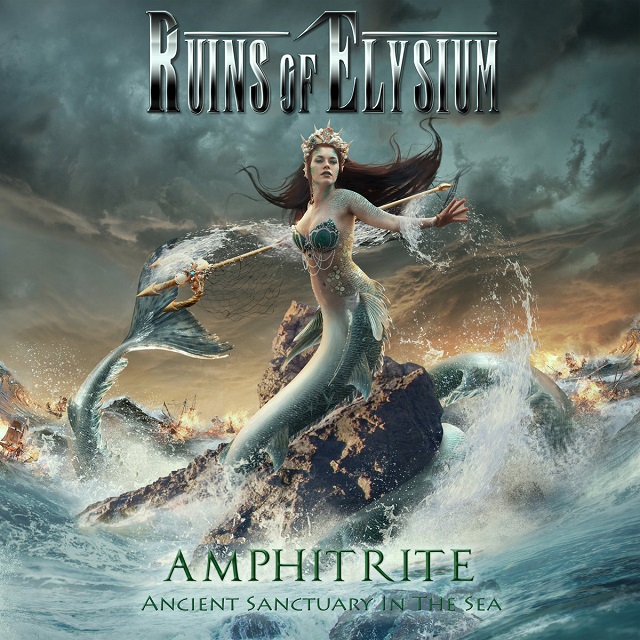 Was not ready for this one! Ruins Of Elysium is symphonic power metal, which is great, but this trio goes over the top, even more so than those early Rhapsody albums. On third opus, Amphitrite: Ancient Sanctuary In The Sea (what a mouthful that is), Ruins Of Elysium throw everything plus the kitchen sink at the listener. Quality control and trimming are needed, plus there are aspects that need getting used to. This isn’t for everybody, not even for those that love Euro power metal.

Drake Chrisdensen’s vocals is the first curveball as his operatic vocal style can be pointed more towards a theatre or performing alongside The Three Tenors. Hearing this vocal style in metal is unusual, but the guy can sing and does so with gusto and emotion. There is much time to grow accustomed to it as Ruins Of Elysium thrust 73 minutes of music into a theme of mythological women of the sea. Symphonic elements are pushed into the forefront as the guitars are often drowned out by the bombastic violins, horns, bells, and other instruments. It can be frustrating at times, especially when a distinctive guitar part is thrown out at the beginning of a cut, but refuse to ride it out throughout a song.

8 minute opener “Alexiel – An Epic Lovestory” (how’s that for a title?) showcases what these dudes are all about – huge sounds, differing tempos, duet with female vocals, simmering drums, and it feel like going through a musical play. A multitude of influences are showcased throughout, Japanese folklore and instrumentation in “Okami, Mother Of The Sun” and African tribal beats in “The Ocean Is Yemanja’s” and while on the surface seems simple, these are robust offerings with many musical changes. Seeking songs that are more “traditional,” “Queen Of The Seven Seas” and “Atlas” mostly maintain a steady course throughout and feature an uplifting, memorable chorus. Contrast that to “Belladonna” which has everything from blast beats to flamenco guitar and has sort of this dark, but hopeful attitude to it. Another strange song, but it works. “Leviathan” is a mystical ballad with a glorious lead guitar melody, but then takes this ethereal, dreamy atmosphere accented by bolstered drums. That chorus though sounds very Disney like.

And that’s the major drawback of Ruins Of Elysium – there is so much going on and it leads to fatigue after a while. They deserve much credit due to their uniqueness and creativity, and if the fat was cut, it would garner a higher score.