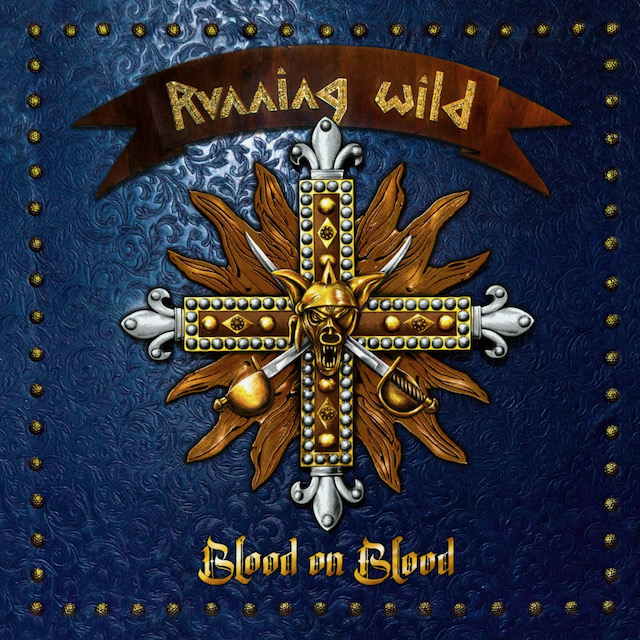 Since the 2011 reboarding, when Rock N Rolf took HMS Running Wild out of dry-dock, the Deutsche doubloon seekers have continued to sail familiar waters, the seas they've long ruled. The lyrical themes, however, are not all seafaring tales. Actually, precious few this time around. Kasperek calls the ten tracks the most diverse of any album (a pair of extras, plus a cover of KISS classic "Strutter" can be found on the Crossing The Blades EP, released pre-pandemic).

The title cut opens, a mid-tempo romp instantly recognizable as the ghost ship denizens. The "Blood on blood, we stand as one" chorus should be a live rallying cry. However, "Wings Of Fire", which is up next, is a superior construct, adopting a grittier, more aggressive guitar tone. It's not speed/thrash, but built around infectious riffing. It is the first of two related to the prophecies of John of Jerusalem, the French Knight Templar and co-founder of the Templar Order.

First single "Diamonds And Pearls" is one of the buccaneer batch. Is it me, or does he seem to give those songs just a little bit more oomph, in the delivery? The screaming guitars on bouncing "Wild And Free" relate a biker mentality (asphalt outlaws/pirates?). A bit low key and mindless, but still hope this one makes the live set. It's one of two Rolf labels as "party rockers." The other is groove oriented "Wild Wild Nights".

Titular track from the aforementioned Dec. '19 EP (the lone holdover) six minute "Crossing The Blades", about the Musketeers, features a lengthy guitar oriented instrumental section. The Celtic flavored "One Night One Day" alternates between mid-tempo and folky crawl. Rolf's vocals are double tracked and in the forefront. Different, and as such, an acquired taste (at best). It is followed by the recent single/video "The Shellback" (nickname of sailors who has crossed the Equator), which initially keeps its predecessor's subtlety, before firing up, ultimately settling back down, come the end.

As has been the case on the last few Wild platters, the closer is a mammoth length inclusion. Here, it's the 30-Years War related "The Iron Times 1618-1648", clocking in, in excess of 11 minutes. Overall, enjoyable, but having supported Running Wild for almost 40 years, don't feel more than a couple of these tunes have the sea legs to last beyond the current journey. Bon voyage.