SABATON - The War To End All Wars 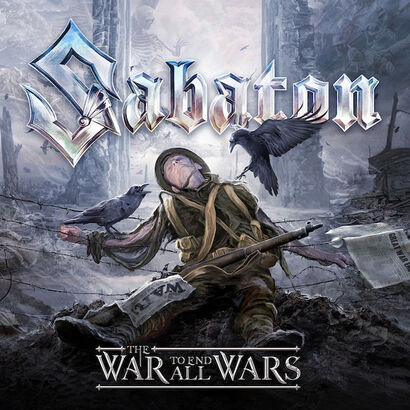 While certainly a stand-alone concept album, the Swedish musical historians' latest eleven stories should be viewed as a companion piece to The Great War (2019), fleshing out the history with more tales from what is considered, in the USA, a forgotten conflict. Late to enter the war, American deaths (horrific as 117,000 is) were "light" compared to those who had been fighting for years. Some totals, regardless of Allied or Central Powers were 10, even 25 times higher. Canada lost about half the US number, but a greater number, overall, than in WWII. After the Second World War, much of Europe had to be rebuilt, but the remains of WWI: statues, major military cemeteries and uninhabited tracks of Belgium and France still off-limits due to stockpiles of deadly gas and/or unexploded munitions, survive, to the present day.

Throughout their discography, the Swedes have recounted "The Price Of A Mile" or "Cliffs Of Gallipoli", realistic anecdotes from the (not so) Great War. This time around, while not arranged chronologically, the album DOES open (courtesy of some female narration) with the assassination of Austrian Archduke Franz Ferdinand, which quickly spiraled out of control, into a continental conflict. The table setter is a riffing, (Russian goose-step of a) slow march, complete with orchestral strings and group chorus (a recurrent motif): "From a shot that would change the world. Tensions rise and a war is unfurled. Nothing like what had come before. It's the war that will end all war." Two-thirds of the way through, the guitars buzz, before falling back to the belabored pace. Conversely, the disc ends with "Versailles", site of the treaty that not only brought the whole affair to a close, but (unfortunately) set the stage for the global conflagration that would unfold two decades later: a fact eluded to in the final voiceover. In between, the sadly incompetent military "minds" on both sides, fed soldiers to the meat grinder of technological advances (machine guns, bombs, tanks, gas/fire, even bi-planes) using inferior/out-dated, Old World tactics. As a visual compendium, would suggest movies like 1917 and the old Mel Gibson vehicle, Gallipoli. 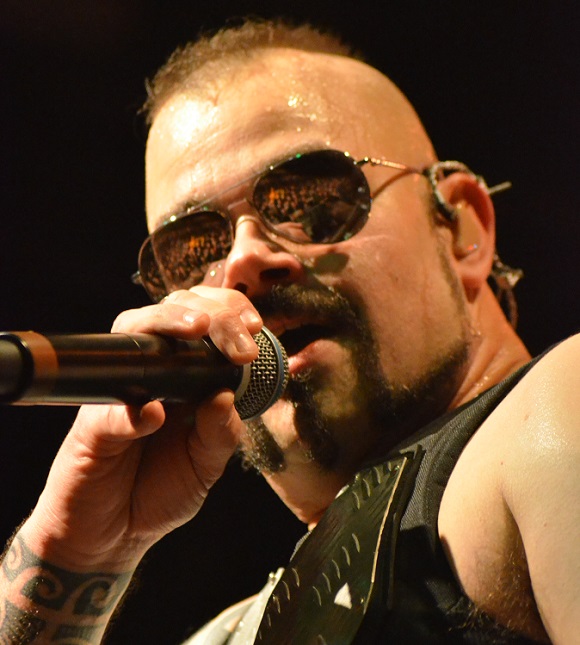 So, this is not some mindless, throw-away, "Sex, drugs & rock n roll" platter. Nor is it a sterile, dusty museum piece. While a few of the songs will undoubtedly survive to become setlist favorites, it should be listened to/viewed as a collective. It's a work of art, destined for the largest concert stages of Europe, littered with barb wire, period era costumes, fire cannons and pyro galore, plus military accouterments. Sabaton always attempt to imbue the historical accuracy with an emotional component. Witness "Lady Of The Dark", regarding Milunka Savic, a Serbian who initially took her brother's place in the army (disguised as a man), then, over the course of three separate conflicts, became one of the war's most decorated soldiers, ultimately receiving medals from France, Russia and Britain, as well as her own country. Drummer Hannes Van Dahl punctuates this staccato mid-tempo number.

Guitarist Chris Rörland received five co-writing credits, for the music. Rest of the lyrics/music was done by the long-running masterminds Pär Sundström & Joakim Brodén, either in unison,or solo. Experts in the use of dynamics, the all-out speedster of the batch is "Stormtroopers", #2 in the running order, about the pre-blitzkrieg German infantry, charging out of the trenches. Can't have a slow mover for the subject matter! Come the chorus, Brodén announces, "A glimpse of the future, new tactics in war. New doctrine in combat explored. As fast as lightning, no time to mourn. A glimpse of the future, a blitzkrieg is born." Hope this one's featured in the live set.

The sound of lapping waves greets "Dreadnought", a paean to the early 1900s UK's big gun battleship HMS Dreadnought. Such an imposing vessel, eventually all similar ships were simply referred to as "dreadnoughts." Get your "sea legs," as the tune rolls, like a slightly unsettled (but not violently pitching) sea. Add Sir Adrian Carton De Wiart to the list of incredible fighting men immortalized by a Sabaton song. "The Unkillable Soldier" is a rousing, gallop-shuffle (can almost hear the melody running) as it imparts the laundry list of wounds the British officer endured. Initially shot twice, in the face, losing his left eye and part of an ear, he would be hit seven more times, including through the skull and ankle in the Battle Of The Somme, in the hip, at Passchendaele, stomach, then ear, before losing his left hand in 1915. If that weren't enough (and it should have been!), he pulled off his fingers, when doctors refused to amputate them. In WWII, he survived two plane crashes and escaped from a POW camp, by tunneling out (one-handed?). Wow. Some called him the toughest SOB who ever lived. This guy doesn't deserve a song, he should get a full album (if not a movie). After that, rock/metal seems tame!


"Soldier Of Heaven", one of the pre-release singles/videos, is a more emotive, ethereal concept: the reminiscence and thoughts of a battlefield casualty, forever to stand guard atop the mountain pass where he fell. Concerns White Friday, a Dec 16th, 1916 avalanche that wiped out hundreds (if not thousands), of which only a few dozen bodies were ever recovered. Beginning with a bouncy synthesizer beat and 80s electronic drums, the lyrics actual say he will take the "stairway to Heaven." Tempo and power fittingly intensify for "Hellfighter", complete with some rolling triplets and a fleet fingered solo. It commemorates America's 369th Infantry Regiment (sometimes called the Harlem Hellfighters), the first Black regiment to serve in WWI. It also included soldiers from Cuba, Puerto Rico, West Indies, as well as South Americans. They spent more time in the trenches than any other unit, also suffering the greatest number of casualties. Bet it goes down a storm in concert.

Early in the war (Oct. 1914), in an effort to thwart the German invaders, Albert I, King of Belgium (fighting alongside regular soldiers) orders the flooding of the Yser River, thereby creating an impenetrable, natural barrier. These events are chronicled in "Race To The Sea", a majestic mid-tempo defiant flag waver.

If you doubt the scope of the military involvement, or how big the metal world (Sabaton fanbase) extends, then look no further than "Valley Of Death". Odd, given the title, but it's a quick picking, adrenaline pumper, with big sound, sort of "Eye Of The Tiger" meets "Final Countdown" (or their own "Shiroyama"). Not sure how many Bulgarian pride rock anthems there are, but this one, about a three-day battle for Doiran: out-numbered, yet holding off a combined British/Greek force, surely shoots to the top of the list, at least for English-language options. As unlikely a topic for Swedish metal royalty as past effort "Winged Hussars", but it works.

Use of piano, and with a nod towards TSO, the kings of holiday rock music, back in December, the Swedes wisely issued "Christmas Truce" as a single. Not only does it have a Yuletide theme/ feel/sound, but it's the unbelievably true tale of Christmas Eve 1914, when some (not all) warring British and German soldiers called an impromptu temporary ceasefire (which ultimately cost some officers their rank!), exchanging cigarettes, drinks and even engaging in a bit of soccer, in the name of the holiday, before returning to opposing trenches and began shooting at each other once again. Great video too.


Much like its The Great War precursor, which concludes with a cappella choral recitation of the "In Flanders Field" poem, this edition closes with a regal, culminating "big picture" moment. Mostly a spoken word outro (set to military rasp of snare, with subtle symphonic accompaniment), the aforementioned "Versailles" reiterates the mood at the time: millions of casualties on all sides, America returns to their shores, Russia tends to their own matters (the Communist Revolution) and British Empire (partially) disbands their colonial forces. Despite the jubilant sing-along, it ominously foreshadows the more catastrophic second act: "In the underground, something is growing in the dark. For some, the war never ended. War will never entirely die. It will evolve. It will change and war WILL return. Sooner than you think."

As with the earlier WWI disc, there will be a History Edition, adding a few lines of spoken/introductory narration (providing deeper explanations) to each track. Despite the weighty topics, Sabaton are not dour faced academicians...far from it and their concerts are a thrilling roller-coaster ride. At least listeners can learn something from all that heartache and misery.