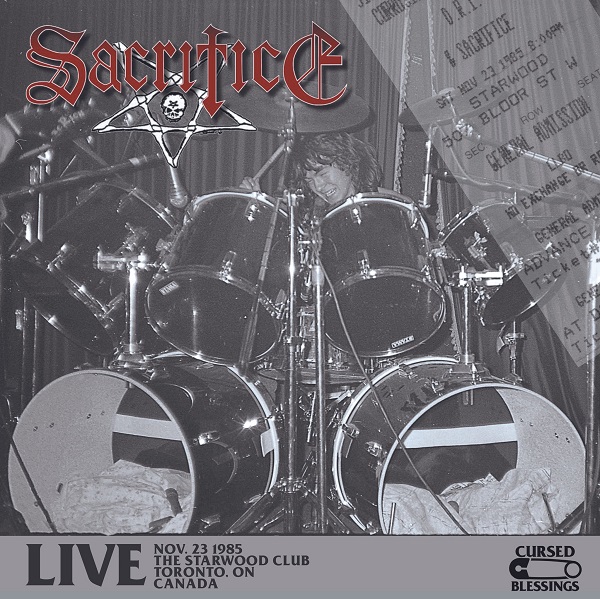 Oh man, is this ever a treat for those interested in the history of extreme metal in Canada, this very raw live recording of the one and only Sacrifice from November 23, 1985 in Toronto absolutely hitting all the sweet spots. The band lays down a set featuring all songs that would go on to appear on 1986 debut Torment In Fire, and the youthful energy is just off the charts on every one of these tracks, from the manic “Sacrifice” to the sludgier “Burned At The Stake”, which of course gets manic, too.

It's all manic, man, every second of this wild record down to manic-times-two closer “Beyond Death” just a fantastic time-capsule documentation of an era long gone but not forgotten and, thankfully, being kept alive by the kind folks at Cursed Blessings Records. The sound quality is very raw, recorded on a cassette player, but it's actually surprisingly listenable, and it very accurately captures the spirit of the time, sonic warts and all. I mean, “listenable” is relative here: this sounds like hell on earth to the average human, like an eyebrow-raising curio to even lots of people into metal, but like perfection to those of us who care about extreme-metal history lessons, something that no one is qualified to teach more than Sacrifice here in Canada.

Killer release, limited to 500 on vinyl, so don't snooze if this sounds like your thing (and, honestly, you immediately know just by looking at the artist name and album name if this is your thing or not, this review mainly existing just to say, yup, this is exactly what you think it is, and it's awesome).