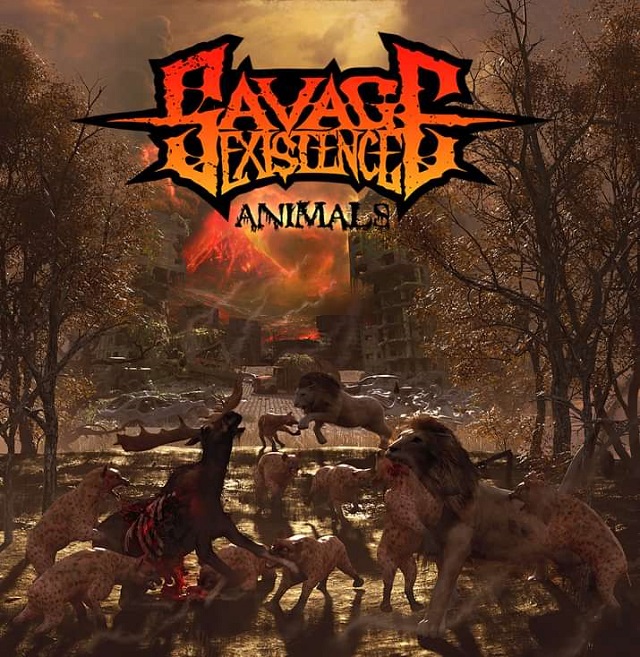 Costa Rica’s Savage Existence lay down some nasty grooves in their full-length debut Animals. When staring at the band name and album title, I can’t help but think of that VH-1 show Supergroup where Ted Nugent, Sebastian Bach, Scott Ian, Even Seinfeld, and Jason Bonham form a band and Bach suggests they name their group Savage Animal before deciding on Damnocracy. The music Savage Existence blare through the speakers bears little resemblance to the Bach and Nugent’s group as the Costa Ricans pummel listeners with groovy death metal and vocals resembling Lamb Of God’s Randy Blythe.

Produced by former Machine Head guitarist Logan Mader, the guitars roar in and take the forefront along with Anton Darusso’s growling, throaty vocals. The lyrical content ranges from anger, dealing with personal issues, and primal energy as the title track encapsulates the raw form of Savage Existence with mid-tempo, full riffing complemented by rhythmic, tribal drumming. It’s easy to see what the band is going for with song titles like “A Thousand Pounds Of Trainwreck” and “I Identify As Hard” with in-your-face, aggressive music that reminds of mid-‘90s Pantera.

“Down By The River” takes listeners on detour with a piano arrangement to open the tune along with well-done clean vocals. A nicely written song and diversion from the hostile, forceful cuts the Savage Existence belts out. At 11 songs, it runs too long and the last few songs slam together like a wrecking ball with little variation, but these guys clearly have talent. Just hone in and tighten the songwriting and Savage Existence will leave a brutal mark on the scene.