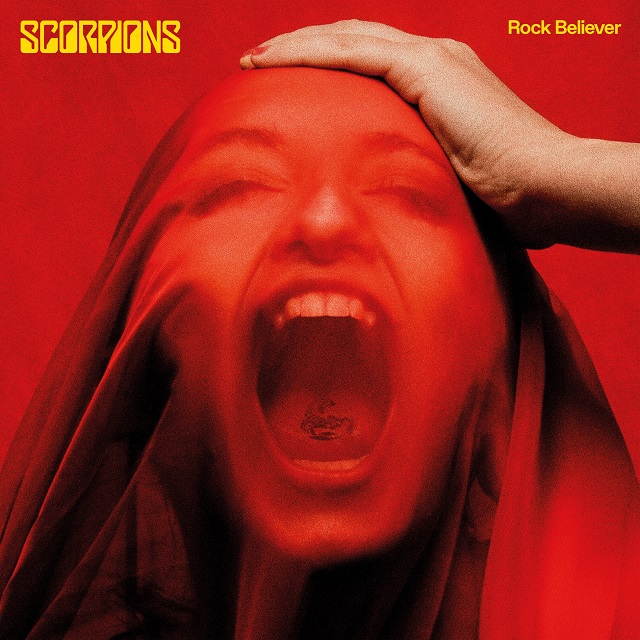 “Scream for me, screamer / I’m a rock believer like you.” Those words from the Scorpions’ new album says it all. Rock Believer is a love letter to their chosen profession and their fans all around the world. It’s a feel good record with up-tempo anthems and callbacks to previous material that surprisingly pushes ballads to the side in favor of biting guitars with inspired songwriting.

This is Scorpions doing what they do best – guitar driven rock with a steely front as the production is clean just enough with Rudolf Schenker and Mathias Jabs crushing out notes with the right amount of distortion balancing modernity with an old-school mentality. The guitar duo is backed up by the reliable Pawel Maciwoda on bass, a sturdy performance by Mikkey Dee (he doesn’t get too crazy, but keeps the tempo going), and Klaus Meine shines as bright as ever behind the mic. Impressive stuff especially considering Schenker and Meine are both 73!

Engine sounds begin opener “Gas In The Tank”, a cruising rocker to set the stage and contains self-referential lyrics and the guys out to prove they do indeed have much more to give musically. “Roots In My Boots” and “Knock ‘Em Dead” continue the theme of rock ‘n’ roll being in their blood and living that lifestyle. The former has a drab chorus, but musically rips while the latter contains screaming solo work. Single and title track is made for the live crowd; an anthem for all those who supported them and their music for all these years. Can easily seeing Klaus beckoning the crowd to scream, “I’m a rock believer!”

Rock Believer spreads its wings on the middle tracks and really takes off. “Shining Of Your Soul” begins with an eerie, almost sinister main riff that bounces into a laid, back reggae rhythm reminiscent of Lovedrive’s “Is There Anybody There?” Fantastic way they meld both aspects together. It becomes even better with “Seventh Sun” coming in with that “China White” vibe. A thumping bass opens up into a mammoth, huge riff with Meine’s vocals almost haunting in the chorus. This is Scorpions at their best! Maybe Dee’s influence gave them a kick in the ass! “Hot And Cold” holds that classic Scorpions swagger and would fit right on Love At First Sting.

The Germans keep it moving with two short, high-octane slayers with “When I Lay My Bones To Rest” channeling the raw energy of “Another Piece Of Meat” and “Don’t Make No Promises (Your Body Can’t Keep)” and first single “Peacemaker” raises hell with screeching guitars. Another stomper comes in the form of “Call Of The Wild” with a seductive, hypnotizing vocal and more robust riff work and crushing drums. This song and the before mentioned “Seventh Sun” hit with that powerful hook like “The Zoo” and “Animal Magnetism” did in 1980.

Closer “When You Know (Where You Come From)” is a mature, reflective ballad with touching lyrics with better composition and refinement than the ballads found on 2015’s Return To Forever.

The 2CD digipak edition comes with an additional four songs plus an acoustic version of “When You Know (Where You Come From)” that is even more beautiful and somber with the electric elements removed. While singularly, the extra tracks don’t stick out as much, but as a whole the make for a sweet dessert after the meaty main course.

After the so-so Return To Forever, it is safe to assume many lost in faith in the Germans’ ability to crank out a high-caliber collection of songs. After this fresh sting, many will be Believers again.