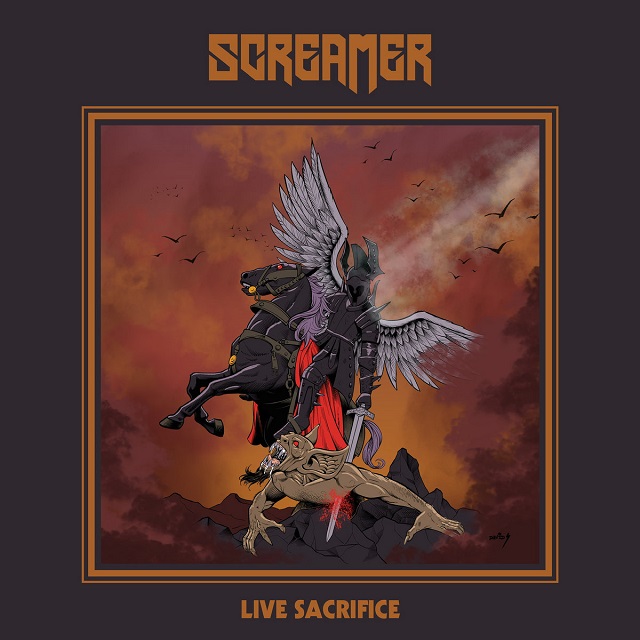 Essentially a self-issued live compilation, sold via Bandcamp and available on both vinyl and CD, the Swedes were recorded throughout Europe during '19 and '20. Funny enough, the dozen song running order is virtually identical to the live stream (which I've played countless times since its appearance), last April. It is not simply a remix of said show (able to spot the subtle inflection differences, better backing vocals, etc. and "Mr. Noman" is missing here) but there was a pent-up (pandemic induced?) energy to that set, which accounts for the repeated listens. So a near replica is sonic gold, even if much of Andreas Wikström's self-deprecating humor was left on the cutting room floor.

Recent converts will find much to like, as Screamer were on tour in support of Highway Of Heroes, so essentially 70% of that disc found its way into the setlist. Infectious, sing-along choruses, within a traditional, headbanging/fist thrusting context are the rule. From the opening "Ride On", to nearly falsetto closer "Out Of The Dark", there's no let-up, without a ballad/slowdown in sight, often segueing into the next song, before its predecessor is complete. Those still unfamiliar with the band (Hurry, get onboard!) can investigate a sampling of back catalog, in the live setting, for which the songs were always destined. "Shadow Hunter" sees Wikström's lungs puncture the stratosphere, while everyone adds their voice to double bass drum driven "On My Way" (you will too). "Keep On Walking" turns into a guitar workout, complete with a brief, a cappella/hands clapping overhead mid-section. The mystery surrounding autobiographical "Monte Carlo Nights" needs to be unraveled, while "Towers Of Babylon" has lead/backing voices, as well as twin lead guitars, in unison.

Songs, musical chops and stagecraft, the pandemic HAS to end soon, so bands like Screamer can be seen/heard by the multitudes. They deserve it!