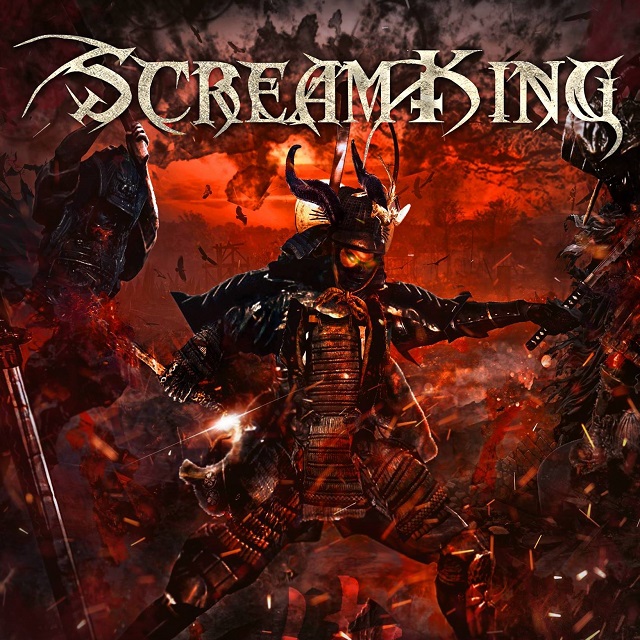 Indiana's Screamking's third album includes guest appearances by Harry Conklin (Jag Panzer), Ronny Munroe (Metal Church), Tim “The Ripper” Owens, and James Rivera (Helstar, Seven Witches). Touring since 2011, sharing the stage with Anvil, Raven, Metal Church, Ross the Boss, and Sanctuary, Screamking's music will appeal to fans of these names. First track "Thee Indomitable Spirit" features one, or two, maybe three of these powerhouse singers? I'm not sure because it is not included in the band bio, and I hear a couple voices trading off and providing backing vocals. But everyone is singing too high.

Spoken word begins "Reign Of Hellfire" with more backing vocals and it appears these 14 songs are part of a concept album, story? Hard to figure out without album details. Faster tempo and accenting orchestration for "Caligula", twin guitar harmonies and lots of shredding. "Legacy Of Honor" is more direct, while all the fancy sweep picking in the two minute "Unleashing The Demon" instrumental/interlude serves no purpose. Slower and more an ‘80s Candlemass flow from the riff in "Tecumsas Revenge",  the two voices playing off each other doesn't work. Where is the chorus? Sounds like Rivera on "Trail Of Death" who gets lost with the other voice, maybe that's Owens. Black metal blast beats during "Spirit In White"; these guys are all over the place without direction. Spoken word and spooky clean guitar for "Bloodlust" - very King Diamond-ish before "Lady Bathory”. I'm not sold on this band, or album. Potential in the musicianship, but sounds like there are many influences not properly delegated with too much going on or a cohesive vision. Too many voice layers, part traditional, part prog metal, but not focused like Symphony X or King Diamond.