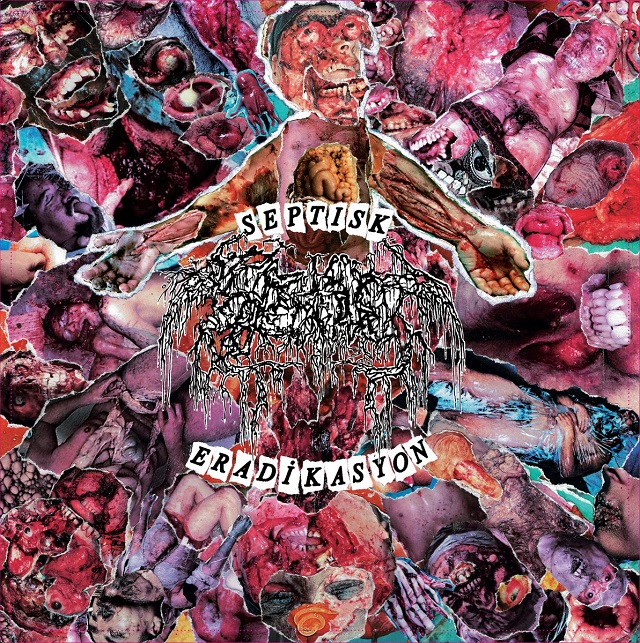 Hailing from Copenhagen, Septage formed in October of last year and are already on an amazingly quality second EP here (Me Saco Un Ojo is releasing the 7” vinyl while Dark Descent releases the CD version).

The band's style of sewage-dwelling caveman death will easily appeal to fans of early Carcass, opener “Of Gangrene Limbs” even having an acid-labyrinthine Autopsy/Abscess riff for good measure. But there's more here than just easy gore-grind, the band definitely tipping their hat to early Finnish extreme death metal, songs like “Perpetual Fetid Odor” as heavy as the most boulder-moving DM but also with a levity and catchiness found more often in gore-grind. “Sick Possessions” utilizes the suffocating—in a good way, mind you—production to much impact as everything just blasts and blasts and blasts for a glorious two minutes.

“Simmered In Mephitis” closes it off with four minutes of well-balanced death and grind, death/grind, grinding death, sewage-covered blasting, and general horror, with a teeny bit of d-beat and punk/hardcore invading things during the song's midpoint march to death, and there's even a bit of fun rock swagger (believe it) in the maniacal guitar solo.

I love this EP; Septage did everything absolutely perfectly with this one. Clocking in at a refreshing 12 minutes, this EP is just as rewarding as any extreme full-length you'll spin this year.