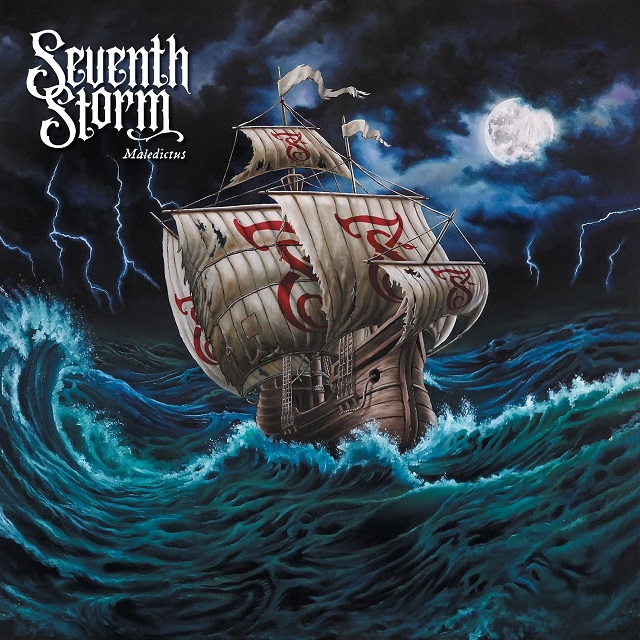 Less is more. But Seventh Storm doesn’t take this to heart on their full-length debut Maledictus. The new Portuguese metal unit led by former Moonspell drummer Mike Gaspar is mostly power metal with epic flourishes, black metal touches combined with hard rock, nu-metal tendencies. Yes, that sounds like a recipe for disaster, but there are a wealth of interesting ideas present and some truly fascinating moments, however Seventh Storm push these ideas to tedious song lengths. It’s a weird, strange, enjoyable, but frustrating listen.

Storm is flanked by Butch Cid on bass (former live bassist for Danger Danger singer Ted Poley), guitarist Ben Stockwell (Volt), guitarist Josh Riot (Yellow Dog Conspiracy) and singer Rez (ex-Scar For Life, The Fuzz Dogs). Rez is an interesting one his voice has grit with rasp that is tough guy and nu-metal like, but also has crystal clear clean vocals that bears resemblance to Kamelot’s Tommy Karevik.

Speaking of grit, the guitars could use more, but Stockwell and Riot entertain with an array of riffing, steady, melodic soloing. They could lose some of the nu-metal type riffs they employ however. The Cult like, smooth sounding “Seventh” is one of the shortest tracks at 5:43 and it’s also one of the best – a tight sounding groove, great vocal delivery, and dangling keys with a mysterious chorus. “Saudade” is also a serviceable gothic/power metal track that the band seems to love because the album includes an acoustic English version, and acoustic Portuguese version, and an electric Portuguese version added at the end of the record.

“Gods Of Babylon” mixes double bass drumming, black metal riffing with a Middle Eastern backdrop – a weird song, but could work if it was 4 and a half minutes and not almost 7. Same could be said of “The Reckoning”, sporting main melody that could be heard in a Ghost song while “Inferno Rising”’s chorus could be sung by Scott Stap in a classic Creed song. The latter bolsters into a furious set of riffing and roaring vocals by Rez, which again makes for a strange, but cool listen, especially with the animated drum work.

There is great record hidden in here – the boys just need to sharpen up their songwriting and cleanup the excess.