SEWER FIEND - Echoes From The Cistern 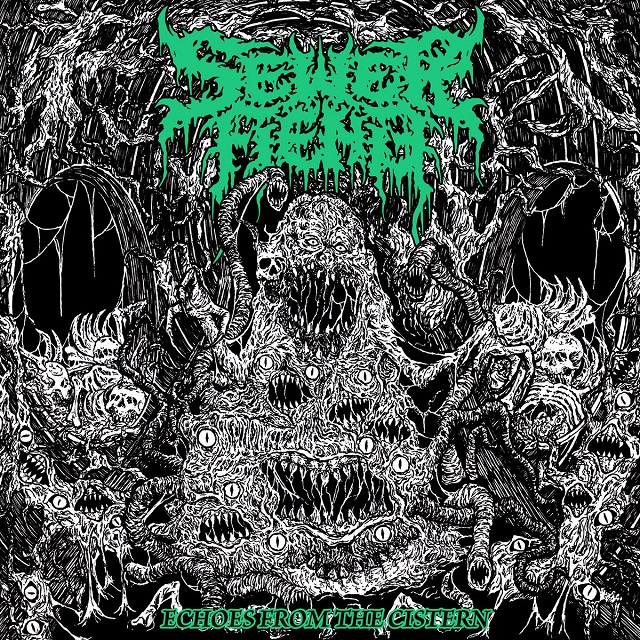 Cool three-song debut EP here from Manchester-based death metal cretins Sewer Fiend, who emerged from the sewage system long enough to pay homage to the caves here on each of these disgustingly dirty cuts. “Writhing In Stagnant Water” slinks through the ooze nicely, with a good amount of sludgy doom to its death, all this sewage just immediately bringing to mind Autopsy and not just in the way that most metal that sounds like it was created in your toilet kinda sounds like Autopsy, but because Sewer Fiend actually manage to get that band's atmosphere down perfectly here.

But it's homage, not ripping off, as this band actually manage to make this their own, with some unsettling guitar sounds, horrid vox, and caveman-on-purpose playing. At 5:01, it's almost epic, and “Pulsating Mass Of Worms”, at 4:39, goes low and slow and slower and while it doesn't quite spelunk, it certainly filters through the sewage murk with aplomb. The title track closes things off, and at 10:14 it takes its time laying down the sludge, the double-time punk polka, the death/doom riffage, the blasting grind under the doom riffs (love that part). I mean, these songs could be 4 minutes, they could be 15 minutes, they all kinda coagulate into one huge ball of mush when it comes down to it, don't they?

And it's great, the end result being more vibe than song (hello again, Autopsy). This EP clocks in at just under 20 minutes, so there's actually a lot to chew on here, and with it Sewer Fiend have made themselves known in the underground. Their debut full-length will definitely be one to watch out for.