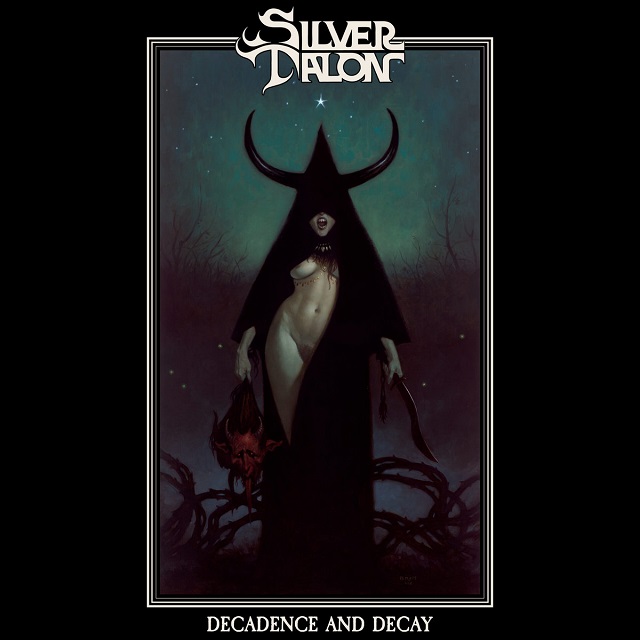 Long delayed (thanks to Covid-19), the full-length debut, Decadence And Decay, from Silver Talon was supposed to be issued more than six months ago. Thankfully, it's worth the extra wait.

First single "Deceiver, I Am" kicks things off, guitar notes literally jumping out of the speakers, prior to the song's start. Those that have heard this teaser have an idea of what lies in store: an upgrade in tempo and intensity over the initial EP. Bryce VanHoosen's bunch have always been about speed and technicality (worshiping at the altar of Pacific Northwest kindred spirits/mentor, Nevermore), but here, the polyrhythmic playing field has expanded exponentially. Relentless drumming atop a veritable blitzkrieg of a guitar army (racing sweeps, hammer-ons and squelch sound effects at the fore), with only the odd exception, this material is aggressive, with a capital A, including the man behind the mic. Wyatt Howell, still sounds like a young James Rivera (Helstar) on the (reduced use of) high notes. Elsewhere, he attempts to put his own stamp on the low-to-mid-range intonations (more prominently displayed than on Becoming The Demon).

The mechanized start-stop of "As The World Burns" and blazing "Divine Fury" are aptly entitled and hint at their hypersonic pacing. An impressive array of skills, the only drawback is listened straight through, at times Decadence And Decay feels like an endurance test, the aural equivalent of the Ninja Warrior obstacle course, with each successive "task" seeking to out-do the one before it. There's no easy-on-the-ears hooks, or melody lines, just pulverizing speed. In that regard, it almost feels like a different band, one aligned with the heaviest sounds of the metallic spectrum. Further to that end, a guest spot by longtime King Diamond guitarist Andy LaRoque's (on "Resistance 2029") creates a somewhat overwhelming soundscape. There are now three guitars permanently within Silver Talon, so a fourth is just mesmerizing. Ironically, it's one of the few tunes to afford a moment of minimalist subtlety/clarity.

That's not to say Silver Talon don't experiment with altering the dynamics. They do. Witness the initial third of the 6:09 "Next To The Sun", comprised of acoustic guitar and a restrained vocal from Howell, before opting for staccato, mid-tempo territory. "Kill All Kings" opens with a smattering of neo-classical shred, reminiscent of the precursor EP, all but absent elsewhere amongst these eight new cuts. Further acoustic picking greets airy "What Will Be", a crescendo building mid-tempo number, showcasing some of Howell's lowest timbre. The six-string onslaught is kept in check, on this one: a full blown (albeit moody) power ballad, if you'd like.

The fade of jingling chimes segues into the eight minute finale, "Touch The Void", complete with spoken word voiceovers. It's two minutes before Howell can be heard and then, within a turbulent sea of guitars (electric and one, standout acoustic), frenetic electronic effects and a swirl of sound. More than any other, this one recalls the late Warrel Dane's contributions, be it in the aforementioned Nevermore, or his solo material. Truth be told there's a similar vibe, in (vocal) parts of "As The World Burns". Big shoes to fill but maybe these newcomers are up to it. Time will tell.