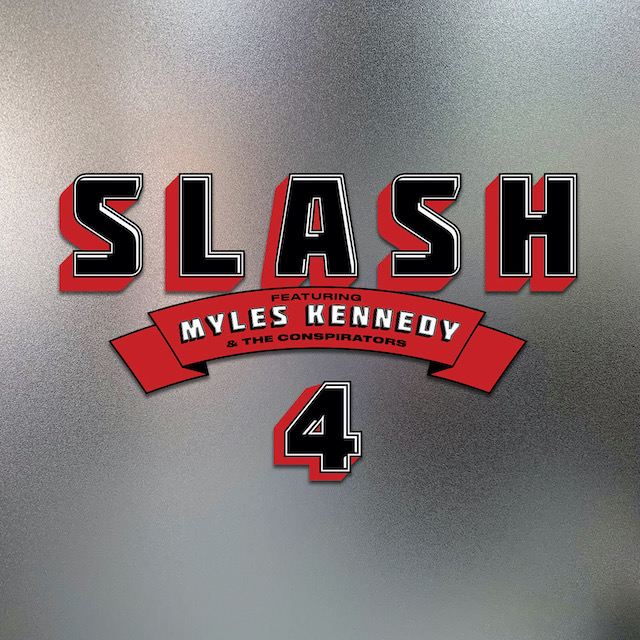 Appropriately titled as it’s the fourth studio album from Slash Featuring Myles Kennedy & The Conspirators, 4 is comprised of ten captivating hard rock songs that strike the perfect balance between familiar sounds and fresh musical exploration. Opening track “The River Is Rising” is also the first single / video from the album and it quickly sets the stage as the soaring vocals of Myles Kennedy are coupled with Slash’s unmistakable Les Paul tone, including a terrific double time guitar solo. Drummer Brent Fitz kicks off “Whatever Gets You By” – a crunchy, moody number followed by the groovy “C’est la vie”, which hinges on a singalong chorus bound to be a hit live. “The Path Less Followed” is a personal favorite as its hooks are so damn alluring. While not out of place by any means, “Actions Speak Louder Than Words” seems like it would be more at home on a Myles Kennedy solo effort, as opposed to a full-blown SMKC affair.

“Spirit Love” has an unusual retro vibe to it, along with a slightly mysterious aura that could translate into an incredibly adventurous video. “Fill My World” is bright and cheerful musically, much like a summer song; however, Myles’ lyrics are rather pensive, offering up a unique dichotomy. Definitely an attention getter. “April Fool” has a fetching rawness to it, matched with an ultra-cool guitar lick. The final two tracks on 4 are polar opposites, which is a unique way to end an album. “Call Off The Dogs” is the shortest song on offer, with a spontaneous punk rock / jam session zeal to it, highlighted by a bass-led breakdown courtesy of Todd Kerns. Much like “Coma” closed Use Your Illusion I, “Fall Back To Earth” wraps up 4 in grandiose style. Lush compositional brilliance with multiple guitar solos, the song breathes and builds its way to a magnificent crescendo. Ultimately, 4 is an engaging rock record that instantly delights and offers new discoveries on subsequent listens.