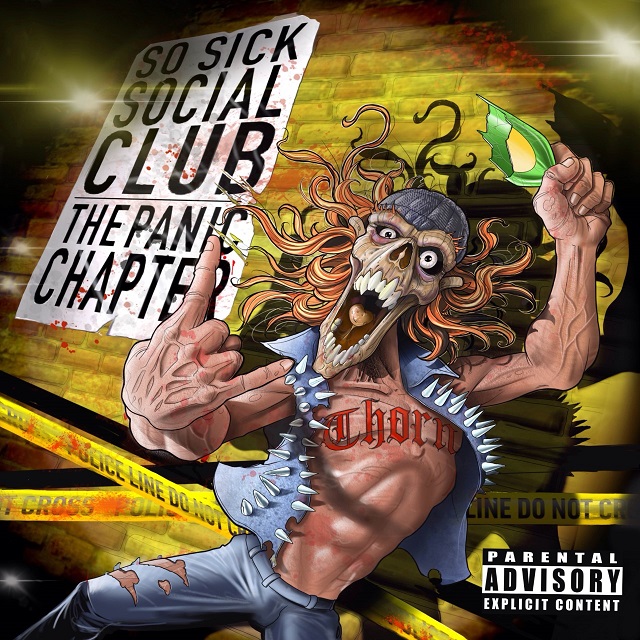 Toronto’s So Sick Social Club doesn’t conform to genre norms. With a horror movie aesthetic, they are a strange amalgamation of industrial metal, nu metal (don’t worry it’s not that bad), and metalcore with the use of synths.

Muffled, echoed vocals drive the tones and subject matter of this eight song, 29 minute jaunt as “Pocket Full Of Pain” comes with a crunchy guitar tone and chugs, but a surprisingly rambunctious solo jumps in at the latter half of this opening number. These boys are full of surprises and groovy bass line in the moody “The Panic Chapter” ends up breeding more guitar histrionics which adds to the flavor the track tremendously. Things take a turn as beats, yes beats, takes center stage on “Look” with a synth backed thump and while in theory sounds like a disaster, it’s actually very catchy and stands out as one of the strongest cuts.

If anyone enjoys going to Halloween events at amusement parks, the creepy and startling notes and lyrics to “Chelsea” would make for a perfect soundtrack to a haunt with a stalker, serial killer type setting. Same can be said for “Buried Away” with its opening notes that sound like Michael Myers is about to stab and unsuspecting victim. I give these guys credit for taking chances and while the dreary “Tears” meanders a bit too much and closer “If I Go” takes too much of a somber tone, I ended up enjoying this much more than I thought. There is some underrated and unexpectedly enjoyable guitar soloing and the creepy, chilling lyrics voiced by aggressive and moody vocals makes The Panic Chapter a perfect album to play when Halloween time arrives.