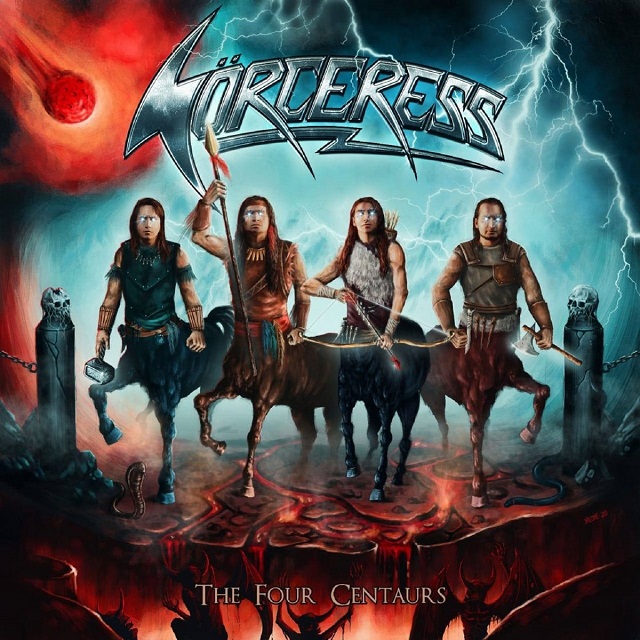 Despite the feminine moniker, this is an all-male Colombian foursome, umlauts over the O. The sophomore effort (cover art depicting each musician as one of the titular mythological creatures!) begins with a bold pronouncement (otherwise voice-less "Exordium" intro) declaring, “We are not afraid of death. We take her from behind and fuck it!" As the SNL Church Lady used to say, "Isn't that special?"

The eight remaining/proper tracks ("Hercólobus" is an instrumental) are beer hall swilling, sing-along anthems, guaranteed to rouse a traditional minded metalhead's voice. Might not understand all of Leder Killer's heavily accented, high-pitched accentuated, Anglo-lyrics, but that never stopped anyone from thrusting their fist aloft or banging their head. Displaying an appreciation for changing dynamics, the likes of "Four Centaurs II" (not sure why two cuts bear the album title, to start the running order), catchy, Maiden inspired "Riding On The Sun" and speedy "Far away" finale are worthy additions to any metallic canon.

Musically, "Paranoiac", could have been constructed by many a big name European outfit and demonstrates the Big League potential for Sörceress. "Born Under Rocks" begins with a tambourine/acoustic strummed guitar, medieval feel, before establishing a middle of the road pace that lays the vocals pretty bare.

Another of the countless non-North American bands, toiling away at the music we love, trying to make an impact, and get ahead. And people (lazy journalists included), falsely defend their repeated listening/purchase of well-established acts, with "Can't find any new bands." Really? Don't have to look far/hard, in the internet age, but apparently with a free flow of information comes less initiative. Get out there, discover something new!