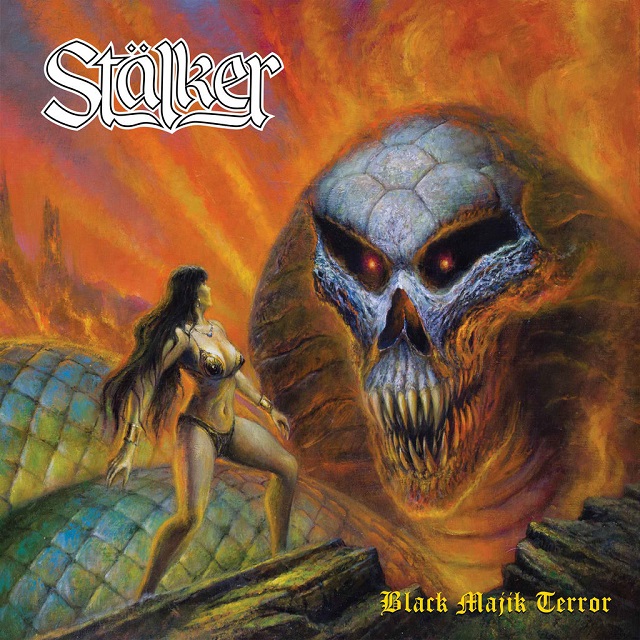 Sophomore effort from Kiwi speed metal merchants. With all the subtlety of the buxom, bikini-clad maiden on the cover, the trio lay waste to nine whiplash inducing anthems. Biggest surprise is the varying lengths, as some bone-snappers (like opening "Of Steel And Fire") blaze by in (well) less than four minutes, others, offer a bit of expansion, stretching five, or even six minutes ("Holocene's End"). In terms of vocals, bassist Daif King offers an unholy mix of strangled yips and yells, as well as normal voice, but then again, no one is listening to Stälker for lyrical inspiration. By the way, in the UK and other former British territories, like New Zealand, D. A. I. F. is an acronym for "Drawn Against Insufficient Funds", aka overdrawn at the bank/checking account.

For the titular cut, a wayward keyboard makes its lone appearance, to introduce the evil laugh punctuated take, bordering on early death metal: Slayer/Possessed style. Somewhere between Banshee wail, Rebel yell and vintage Nasty Ronnie, the full-out "Sentenced To Death" recalls those rudimentary days, at the dawn of the Eighties thrash/speed metal, when proficiency (and sanity) barely rode the rails. Solitary moment of quietude is offered by the aforementioned "Holocene's End". Yes, the longest cut opts for a meander, mid-tempo curfew, allowing each player a short instrumental showcase and a wicked three-piece jam, in the final third, before ending with an eerie, sci-fi soundtrack outro. Definitely different from its screaming surroundings.

Doesn't take long for "Demolition" to get back on the right path. Takes until the midway point of the 4:50 fuzzy, feedback begun "The Cross" to kick into gear, with "Iron Genocide” (sounds like an AI program was tasked with creating metal song titles) following suit. There was a brief bit, in closing "Intruder" that recalls Cleveland powerhouse Destructor, but maybe that's just being too close to their back catalog, and others may disagree (or let it pass, undetected). Regardless, another ripper!

Not much in the way of elocution, nor dynamics, just raw, slamming rapidity. Crash, bang, wallop for a new age!