(A Chance For Metal) 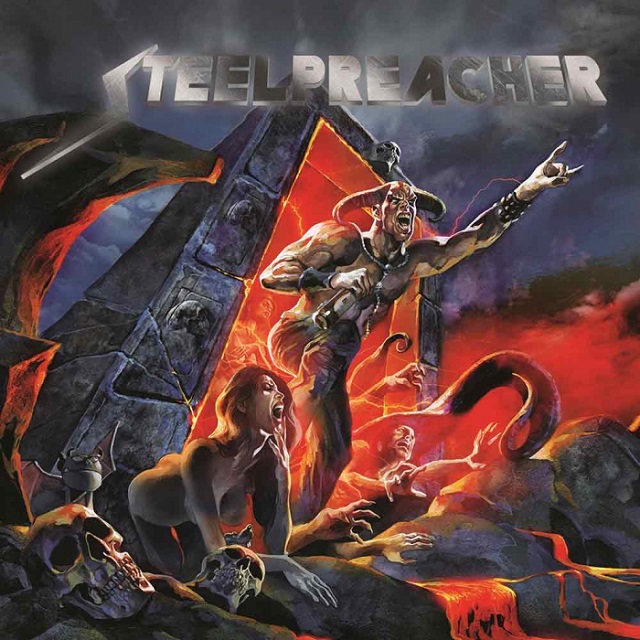 Sixth album from Steelpreacher (all one word), albeit the German metalheads' first in five years. As with the back catalog, the songs espouse a love of beer, quantity over quality, apparently. Much like countrymen Tankard, seems to be the guiding force! Their cheeky ode to backyard BBQ aka "Beer, Meat n Metal" says it all. Might be stereotypical, but would expect nothing less from Germany!

Simple, repetitive anthems in the AC/DC mold. "Here For The Beer" taps the ten-pack, with the titular sing-along chorus. Could see Angus Young skanking around the stage to this mid-paced chugger. The title track, delivered in a gruff voice, references their third album, marvelously named Drinking With The Devil (check out the comical artwork!). Lest you miss the point, Steelpreacher don't take themselves too seriously, enjoy having a good time and even more cold beverages (although the temperature apparently is less important than the amount). "Da Damn Booze", in honor of the "solution" (pun intended) to life's problems, is a bluesy construct, complete with snapping fingers and brushes on the cymbals. "Wish You Were Beer" professes a desire for a different interpersonal relationship.

"The Iron Calls" opts for a Maiden-approved galloping take on power metal, but "Rock For Your Life" (while a salty language, but favorable sentiment: rock is the superior musical choice) is a stylistic dud. Painful. Fittingly "Bad Things Never Last" is up next. Speedy, bass/drum driven "Titanfall" shows the guys don't have to rely on gimmickry. More like this one, please! The "Masters Of The Underground" closer features guest appearances by friends in Dragonsfire and Secutor. All hail to thee.

Creative process seems to be fueled by over-indulgence in drink, then those ideas are recorded (without sobering up) and never edited, but rather straight to disc. Next morning regrets? There are some good ideas and playing, but a short bout of abstinence (and clear thinking or outside opinion/guidance) would undoubtedly prove more fruitful.