STEELWITCH - The Witch Is Back 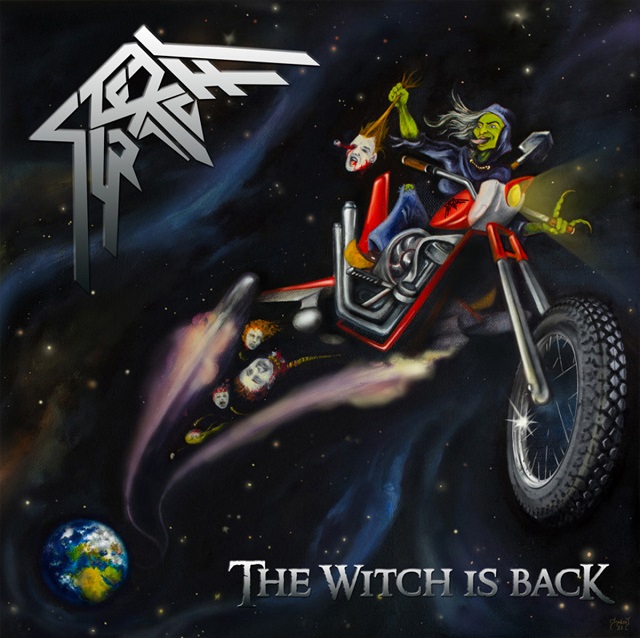 Not to be confused with the sadly defunct Swedes, Steelwing, this is the full-length debut from a Greek outfit that seems to have cloned Bruce Dickinson, at least in timbre. However, Giorgos Papagiannakis doesn't completely ape the Air Raid Siren's stratosphere. Musically, it's speedy traditional metal, albeit all constructed by one man, the pseudonym appellation, "Ungod" (sole instrumentalist: bass, guitar & drums). That said, there's still a middle period (first Bruce go-round) Maiden influence to the sound: circa Powerslave/Somewhere In Time. The most egregious example is a stellar "Flight Of The Wanderer", but most of the constructs clock in a few seconds either side of six minutes.

The promo literature references the early works of classic US metallers like Riot, Omen and Fates Warning. Of the three, only the initial touchstone holds any validity (personally, would stick with the aforementioned Brits, as a more realistic comparison), although the rudimentary cover painting (green witch riding an interstellar motorcycle, distributing decapitated heads) is certainly from the same art "school" as the original Night On Brocken. Here, the title track starts things off, quickly announcing their intent, with a spirited gallop. Can practically see that wayward left arm flailing overhead as Giorgos sings. A few revs of motorcycle engine commences "Rusty Wheels, Haunted Streets", more of a mid-tempo groove. Midway through, there's time for an extended instrumental section, complete with guitar solo, and the intensity picks up.

"Inside The Forest" is the best track, honing their killer edge to razor sharp precision. After an intro and cryptic voiceover, the accelerator is pressed to the floor (double bass drum beats to the fore), the singer turning in a truly Dickinsonian performance. Chugging riff and fist pumping stomp greet "Celestial Visitors", while speedy "Spells From The Grace" follow-up begins with the rumble of bass that reappears throughout. "Keep Fighting" is a lyrically simplistic headbanger, start-to-finish. The mouthful of a finale, "Don't Burn The Witch... The Witch Will Burn You", is more of the same, the culmination of what has come before.