TEMPLE OF VOID - Summoning The Slayer 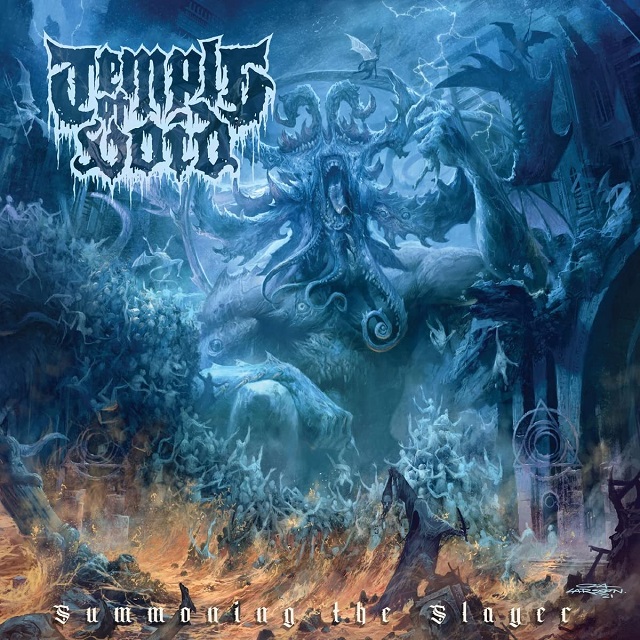 I feel like I can't get too far along in life without Detroit death/doomsters Temple Of Void releasing something, and now here we are with their Relapse Records debut, Summoning The Slayer.

This follows up a very successful run on cool indie Shadow Kingdom, Temple Of Void steadily establishing a sort of confident dominance in the caves, the band creating craggly, doom-laden death that I'm hesitant to call death/doom, so I'll just call doomy death before crying in my beer over the pointlessness of it all, which is perfect because songs like massive opener “Behind The Eye” are a great soundtrack to that, the caveman thumping and bashing through battlefields most devastated just hitting the spot so excellently. “Deathtouch”, however, shows the band's more regal and stately doom, with gorgeous, forlorn melodies, and suddenly I'm taken back to Lost Paradise, never a bad place to visit. “Engulfed” is perilously close to being a doom masterpiece, all epic riffs and huge, moving pillars of drums. I love the atmosphere on this record, something this band has always had tons of, but it seems more mature here, less B movie and more self-assured, late-album cuts like “The Transcending Horror” totally tapping into the spirit of what makes great doom metal.

And great doom metal is all over these seven songs, Temple Of Void here on their fourth album absolutely and completely arriving. And closer “Dissolution” shows that there just may be more tricks up this band's sleeves as they move ahead into their incredibly bright future.