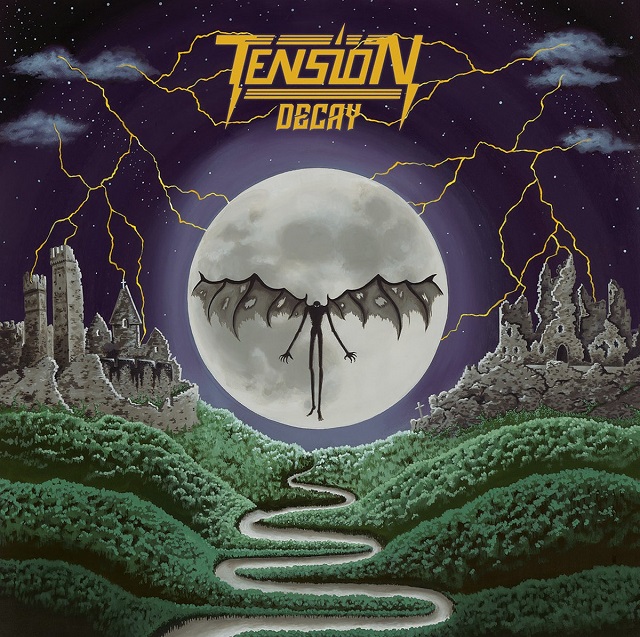 Debut from young Teutonic outfit that exists in the NWOTHM, but also with a nod to hard rockers like Idle hands/Unto Others. Bears no relation to the short-lived East Coast, one album proto-thrash wonders (1986's Breaking Point, on Torrid Records) that began life as Deuce (a band that at one point included a young Marty Friedman) and spawned Tom Gattis (guitar/vocals for Metal Blade artists Wardog and Ballistic).

Nine high energy, sing-along anthems with the crunch of gritty guitar and an almost Goth/echoing vocal. Things start a little slowly, with exaggerated sound effects (haunting, distant, low noise) that ultimately sparks the ignition wire. Staccato riffing "Open The Gates" has a couple of momentum shifts, all the while getting the head bobbing. Near the end, a (rare) spirited six-string solo. With the intro, it clocks in at 6:12, the longest cut. Of the remainder, only two eclipse five minutes.

"Higher Power" has a pop sensibility (repeated, simple chorus), without belying its street metal cred, while "Hellfight" picks up the pace, the drums (especially the snare) practically roll on themselves, like a perpetual cacophony of tumbling down stairs. Somehow he keeps it rhythmic. "Cosmic Gaze" offers the most instrumental interlude, complete with that omnipresent, tight rasp of snare. Dreamy descending scales (almost electrified acoustic) greets "Age of The Stars", but then quickly takes a left-hand (path) turn, into sharp, pointed tonality. Some quick picking and slightly straining/off-kilter vocalizations. Another killer "pop" song, in the form of "Black Knights". Can't rid themselves (nor should they) of the infectious quality, although (wah wah) guitars hepped up a bit more, on "Mooncrusher". As a pure metallic exercise, the occasionally death grunt punctuated "Mistress" comes closest. Concluding "Earth Crisis" is a bonus on the CD (not available on the digital download). There's a stretch of almost 30 seconds of dead air before another distant sound effect kicks in, then the track, proper.

Sure to get major press in the ubiquitous newsstand rock/metal mags in their homeland and with the proper tour slot (and undoubtedly a few festival appearances) should make waves. Huge "main stream rock" crossover potential too.