THE THREE TREMORS - Guardians Of The Void 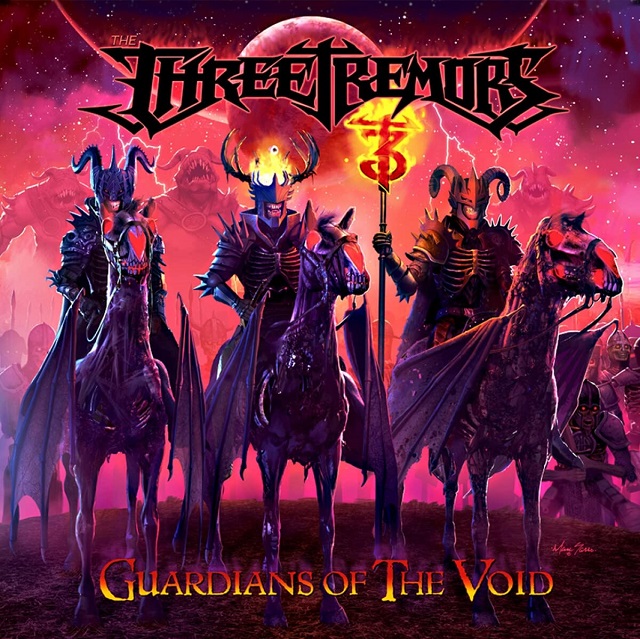 No one has ever accused Cage founder/vocalist Sean Peck of being subtle. He does everything BIG. Concocting intense, over-the-top music, often with wildly adventurous concept albums, he's also parlayed his notoriety to stints with Death Dealer (featuring Manowar guitarist Ross The Boss) and fronting Denner-Sherman, with the vaunted namesake Mercyful Fate guitar tandem. If that weren't enough highlights for one career, Peck aligned himself alongside two of the great contemporary metal voices: Tim "Ripper" Owens (ex-Judas Priest/ex-Iced Earth) and longstanding Jag Panzer frontman Harry "The Tyrant" Conklin. The audacity!

Like the debut, the trio screams, shrieks and terrorizes throughout the course of a dozen tunes, many threatening the stratosphere more than the ozone hole over the polar ice cap. Some "fans" find the speedy, all-men-play/sing-on-ten approach a bit off putting, so Peck & Co. have (occasionally) dialed it back, a bit. Within the 12 cuts, the pace varies (allowing the multiple voices to shine through, rather than appear one atop the other: see "Crucifier"). That said, even the "slower" songs are still heavy. However, the best numbers remain the face melting speedsters. The superstar here is Cage drummer Sean Elg (also backing Owens in their roles alongside K.K. Downing, in KK's Priest), logging more miles on the drum pedals than a Tour de France workout on Peleton. Unbelievable stamina.

Riffing, Painkiller-era Judas Priest inspired "Bone Breaker" sets the tone, each singer venturing to the mic, for a soaring verse or two. Within Peck's lyrical toy box are the historical, as well as fantasy, including "The Fall Of Rome", the hunt/death & disposal of Osama Bin Laden ("Operation Neptune's Spear"), life aboard a Viking longship (almost doomy "Chained To The Oar") and concluding "War Of Nations", no slouch in the pace/aggro stakes, riding a bass heavy groove, as it recounting the end of World War II.

The titular number is one of those all-out frenetic options. "Kryptonian Steel" adopts a more measured (but no less blistering) attack. Wailing traditional metal, at ultimate pace, it is one of the standouts. Dare anyone to try headbanging to this one! Other highlights? Like-minded galloping herd on "I Can't Be Stopped". Might refer to Elg's foot action. Wow! A statement of positive re-enforcement, it's one of the few that sounds like a Cage outtake. Speaking of his day job, Peck peppers the aforementioned Bin Laden tale with fake news anchors and narrative voiceovers, as frequently employed by the San Diego outfit. It races, start-to-finish, as opposed to the belabored stomp of "Catastrophe".