THE TROOPS OF DOOM – The Rise Of Heresy 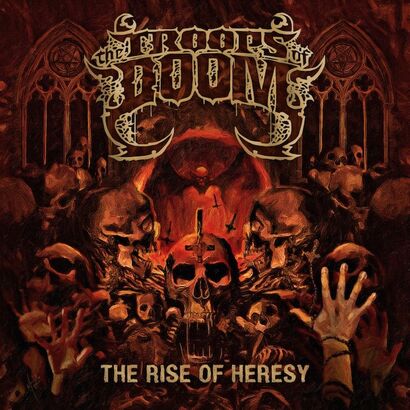 Inexplicably coming under the radar is The Troops Of Doom, the new primal thrash horde led by former Sepultura guitarist Tormentor, who provided the deadly string attack on the Brazilians’ early releases, Bestial Devastation and Morbid Visions. The Troops Of Doom (taken from a song name on their debut) picks up right where those albums left off. Debut EP The Rise Of Heresy isn’t a half-assed tribute or a weak grasp on a past sound; this is a demonic thrash attack with killer riffing and bombastic drum work from Alexandre Oliveira.

Funnily enough, opener “Whispering Dead Words” begins with a symphonic intro, but it quickly dissipates into pummeling guitars and the sound is lifted straight from that grimy, raw, cassette tape recorded in 1985. It’s horrifyingly beautiful and Alex Kafer’s vocals radiate the energy of a young Max Cavalera. There is a pervasive sense of doom and evil spreading amongst this EP and while the “Whispering Dead Words” holds rapid riff changes and glaring leads, “Between The Devil And The Deep Blue Sea” opts for a no-nonsense approach with screeching guitars and rapid drums that could sit right on Slayer’s Reign In Blood. “The Confessional” heads to the extreme with creepy strings and the faint melody collides with a cannonball of speed and stands as a highlight. The title track comes in violently before giving away to the two rerecords, “Bestial Devastation” and “Troops Of Doom”. Valiantly bringing these tracks to a 2020 world, they retain the ferocity of the originals and offer a comforting callback to days long gone. This is thee EP of the year and can’t wait to hear more.