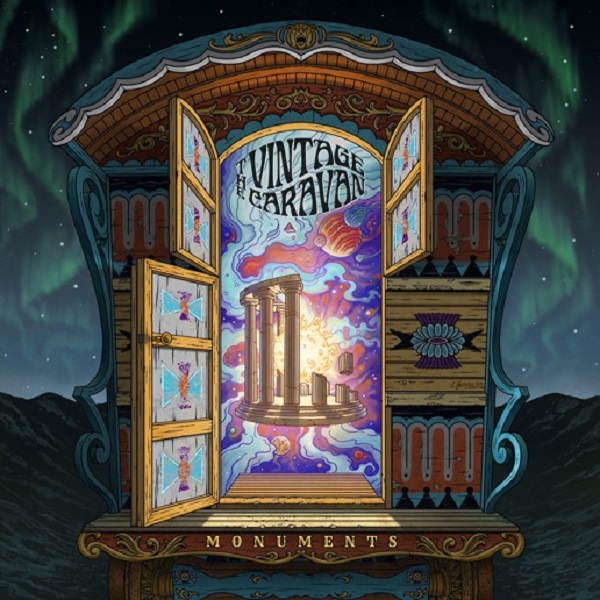 First ran into Vintage Caravan and (at the time) 18 year-old wunderkind leader/guitar whiz Óskar Logi Ágústsson tearing up a bar, in their native Reykjavik, Iceland, prior to being signed by Nuclear Blast. They've since moved on to this debut for Napalm Records, but the aggressive classic rock, meets trippy psychedelia format remains intact. My initial report characterized the live sound as a composite of Frank Marino, the guitar driven pop of Rick Derringer and a dash of Lenny Kravitz funk overtones. Remains true on the eleven selections from the new album. After a fuzzy, shimmering start, "Whispers" opener (the antithesis of hushed tones, complete with sneaky undercurrent of barely audible Hammond organ) proudly wears its influences on its sleeves, as it lays down a kicking groove, punctuated by Ágústsson's fleet fingered, feedback. Gentle, lo-fi start to "Crystallized", eventually upping the ante with spacey, rump-shaking boogie.

There's a no-frills musicianship surrounding the trio (mainman doubles on vocals), lacking ancillary (i.e. promotional frenzy) image/costumes or corrupted personal back story. “Let the music do the talking,” as Joe Perry once said. Essentially a pop song disguised in guitar histrionics, tambourine accented "Can't Get You Off My Mind" is launched in an electronic grind of which their ‘60s fore (grand?)fathers would approve. Acoustic guitar notes prefacing "Dark Times" quickly give way to their electrified cousins, an airy number (despite the title), while the open chord strummed, brushes on snare drum. "This One's For You" is a slow ballad.

Frenetic "Forgotten", the first of two eight minute compositions, picks up the pace (the Caravan's strong suit is rocking out, especially live: on the precipice of being totally out-of-control, before bringing all limbs safely back, from the edge). "Sharp Teeth" unveils some funky, staccato slap bass jamming, throughout, while "Hell" (another one playing against its name) is a lightweight, jangly number, with a chorus-to-hum, seemingly decades removed from the British Invasion. Sludgy "Torn In Two" and like-minded, mid-tempo stomper "Said & Done" blare the low end speakers.

At 8:15, "Clarity" finale is the lengthiest inclusion. However, it's also the lightest, barely braking from a sporadic acoustic accompaniment, plus the odd keyboard intonation, during the initial five minutes, before venturing into the ozone in the time that remains. Certainly NOT the way to close out an album (lasting impressions outweighing what comes before). Still, if you get the chance to see 'em live (particularly a club, preferable a headlining slot), don't miss it!