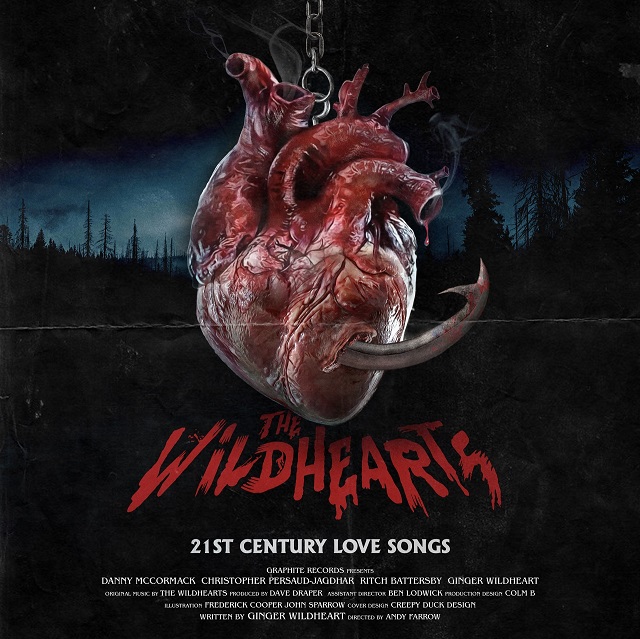 If you really think UK protagonists The Wildhearts have crafted a series of love songs, then you know nothing! The artwork: bloody, crudely severed human heart, pierced by barbed hook, on a heavy duty fishing chain, is more accurate. The gritty, bass thumping title cut, which kicks things off, tosses the gauntlet from the word Go, trashing pop music hitmakers/influencers. "So this man's an expert? He sounds about 12. He said, 'A man needs a woman, at the end of the day.' What a moronic crock of shit for anybody to say. Because if you're bisexual, asexual, lesbian or gay, then you are not represented by the radio, anyway!"

As usual, their brand of pop-punk never minces words, often adding a couple of profanities along the way. The tempos, as well as the words raise a two-fingered Brit "salute" to modern life/society. On the ninth original studio platter (discounting '08 covers effort, Stop Us If You've Heard This One Before) Ginger & the boys once again train their sights on worthy targets and fire away, indiscriminately. Wouldn't have it any other way!

"Remember These Days" gets introspective, looking at himself and the bands career. Debuted in April, via internet livestream, "Splitter", with some slide guitar, courtesy of Ginger, calls out an old pal (bandmate?), chasing memories. At 5:34 "Institutional Submission" is practically gargantuan, in The Wildhearts' world. "Enemies that are not real, fear that no one needs to feel. Left or right, black or white, it's us or them, wrong or right" Caught in the deathgrip of government paranoia." Not only an anthem for our times, regardless of geography, but an infectious call-response chorus that should go down well, in concert.

Somewhat surprisingly, it's backed with "Sleepaway", almost exactly as long, but the paces quickens throughout the remainder of the record. Check out the horror film inspired video, for "Sleepaway", an exception to the pedal-to-the-metal approach, opting for more of a Fab 4, Sixties naivety instead. Spoken, devoid of musical accompaniment, "Fish don't know they're in water" begins "You Do You" decrying the fact "everybody is an 'expert' these days", during the pandemic.

By title alone, current single "Sort Your Fucking Shit Out" should be huge. The catch phrase is already adorning clothing. Directed at a David (?), it's delivered with a pop sensibility, not overtly hostile, making it all the more funny. "If you don't sort it out, you're a twat!" Back to the Earth Vs. The Wildhearts debut, they've used previous recorded bits (old records, telephone answering machine message, etc.) between tracks and "Directions" is prefaced by someone raving about his house being broken into, by a dog. Story behind that clip would be more interesting than said number.

Revved up guitar greets "A Physical Exorcism" which sees Ginger unloading. "Relationships end. Relationships start. Then relationships end again, and you can never be friends, so who the fuck would want to go through that again?" Disc closer "My Head Wants Me Dead" inhabits a similar mindspace, literally: the inner workings (or not) of dealing with/letting go of thoughts, memories, etc. Not the most uplifting way to finish things off, neither in terms of sentiment, nor music, but plenty to enjoy elsewhere.