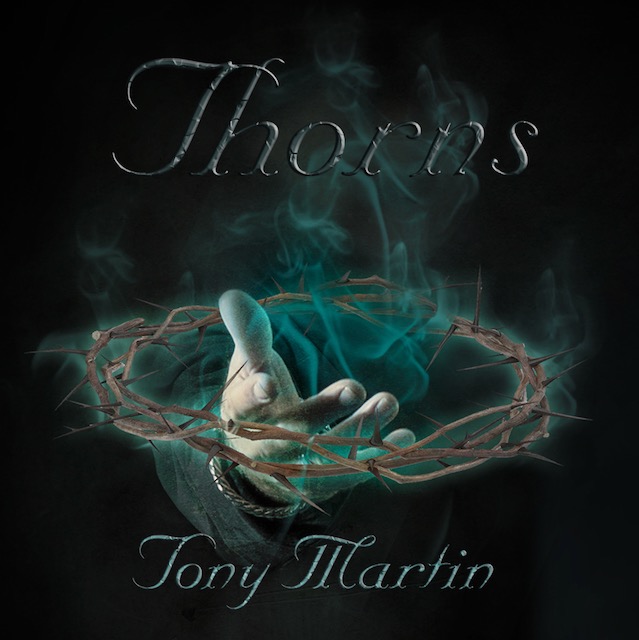 “Cry as the world burns and the world turns into a pool of fire watching as you scream and die!” A chilling and enthralling chorus Tony Martin cracks to opener, “As The World Burns,” from his much anticipated solo album Thorns. The former Black Sabbath frontman is as powerful as ever on a record that features surprising elements that’s good ol’ heavy metal which doesn’t focus on nostalgia or his past, but is planted firmly in 2022.

Martin was smart to nab guitarist Scott McClellan who pulls out a multitude of riffs that punctuate hard-hitting heavy metal. “Book Of Shadows” holds a USPM vibe with a trembling, prodding bass line greeted by choral vocals before Martin crashes in with his superb vocal delivery. This 6 minute journey is the most epic of the cuts that morphs into a chilling acoustic passage backed into a synth solo. One of the best tracks he’s ever performed on! The surprises aren’t over as “Crying Wolf” is an acoustic journey embedded with the Hammond organ complete with solo while “Damned By You” opens with a violin. It’s totally unexpected, but fits in with the devious lyricism and naughty riffing that reminds of Whitesnake. Love that he’s not playing it safe and taking chances.

“I met the devil and he tried to take my wings.” This lyric greets the dreary “Nowhere To Fly”, which starts slow and kicks it into gear in the chorus lines. The closer and acoustic begun title track is a duet with Pamela Moore (Sister Mary from Queensrÿche’s Operation: Mindcrime). Martin and Moore combine for wonderful, thoughtful vocal harmonies in a track that’s the most progressive of the bunch and stands as another highlight.

The diversity of Thorns is its strength as Martin and company aren’t going through the motions with similar compositions and while every track doesn’t reach greatness (the acoustic storyteller, country like “This Is Your Damnation” could have been left off), this is heavy metal written and performed with great conviction. These Thorns have sharp edges and will go down as one of the best of 2022.