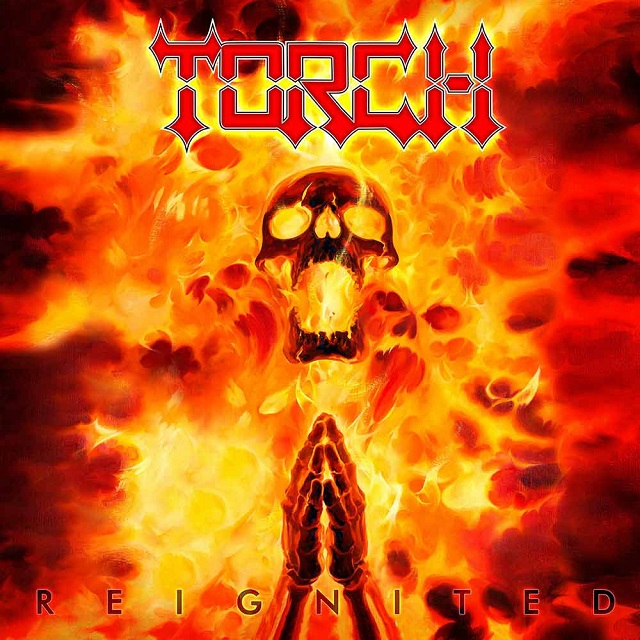 While they've been semi-active on the festival front for a while now, Swedish ‘80s metallers return with their first disc in 35 years! More amazing is the fact it contains 4/5 of the classic line-up. Surely a "new" name for most, even most of the old-timers. The ‘80s (for better or worse) are synonymous with the LA/Sunset Strip explosion that dominated sales and most English speaking magazines of the era. Meanwhile, overseas (especially in Europe) there were diverse styles (hampered in the battle for column space by language barriers), that bore little in common with what appeared on MTV. With the benefit of hindsight, the renewed Torch straddle both camps, including an Americanized "Cradle To Grave".

The old school pop of vinyl is greeted by the introductory gritty guitars of "Knuckle Duster" opener. Lively "Feed The Flame", a history lesson for those that missed out on the music's glory days, is followed by the mid-tempo stomp of "In The Dead Of Night", a tale of hearing "voices." It's a partner to similar minded "All Metal, No Rust", a slow-moving, pro-metal anthem. Echoing, sing-song "Collateral Damage" (punctuated by hammer on steel sound effect) recalls brooding Accept. "Snake Charmer" begins as if a bluesy attempt at an early GN’R knockoff, but the solo therein proves otherwise. Concluding "To The Devil His Due" utilizes a spoken word voiceover heard (to better effect) on the aforementioned "Feed The Flame". Welcome back!