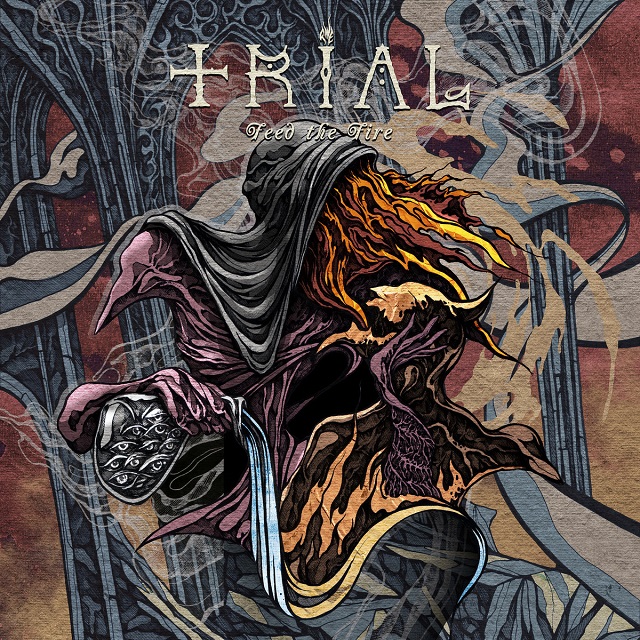 Expressive guitars, wailing vocals, and strong songwriting takes Trial to the top with Feed The Fire. The gavel hammers down high quality heavy metal with occult, symbolic lyricism. The first album with Arthur Andersson (who listeners may know from Air Raid) features more up-tempo songs that contrasts their previous efforts and it makes perfect sense with Andersson’s high-pitched howls and energetic singing.

At a crisp nine tracks running 46 minutes long, instrumental “Tria Prima” opens up Feed The Fire in a subdued, melancholic fashion with electrical guitars flashing a sad melody backed by a marching drum beat. It all explodes to magnetic “Sulphery” with blazing guitars and vocals. What carries Feed The Fire to the next level are the choruses and lead guitar work.
Guitar duo Alexander Ellström and Andreas Johnsson work great as a pair.  Sharp melodies and hypnotic guitar work beg for repeated listens along with catchy, memorable chorus work that blends beautifully with the energetic riffing and drumming. The songwriting and playing is inspired without a wasted note.

Trial, who added the (swe) tag in 2017 to differentiate themselves from other bands, meld different moods for a smooth running order. 9 minute closer “The Crystal Sea” rides on the back of a trance like guitar melody while “Snare Of The Fowler” (which features a guest appearance by At The Gates’ Tomas Lindberg) possesses a climatic solo that hits hard. It’s the best track on the album full of great ones. “The Faustus Hood” almost reads like a eulogy with mournful guitars. It’s like if My Dying Bride tried their hand at depressive trad metal. “Thrice Great Path” keeps the pedal to the metal with continued striking guitar work. It’s melodic, power, gothic metal at its finest. “In The Highest” is the most diabolical of the efforts and sounds like an up-beat Portrait / King Diamond song. Title track holds pulsating drumming and mysterious lyrical work.

Feed The Fire keeps the flame burning and reenergizes a band whose last effort, 2017’s Motherless, was a bit of a letdown. Andersson stepping behind the mic is a boon for Trial and this album along with Wolf’s Shadowland are at the top of the heap in trad metal releases for 2022.