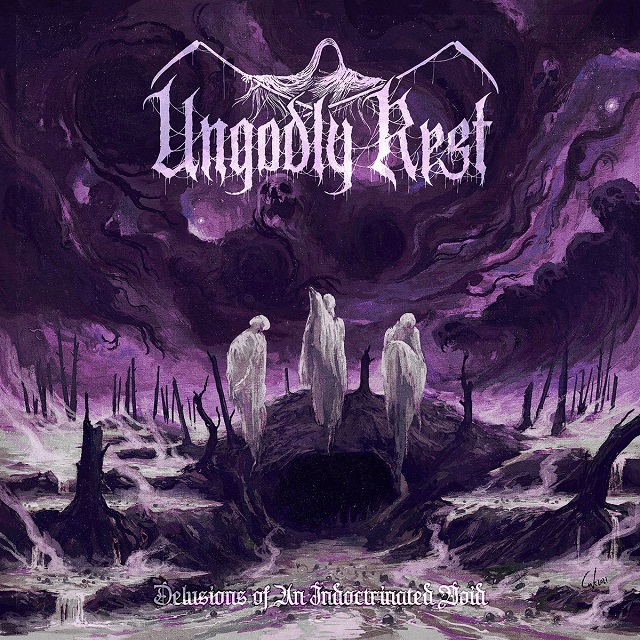 Mexican death/doomsters Ungodly Rest start out strong here with the six-minute “False Belief” (well, things officially start with the useless “The Spectral Arrival Chapter 1 (Intro)” but man I hate intros more and more every year), and I'm all ears, the early Paradise Lost sounds working quite well, the double bass-led stomp through the dungeons of despair stopping off at all the right sub-basements along the way.

It's a good mix of that band's first-album sound with even heavier, sludgier, more sewage-infested influences. “Aztec Offering” is a bit more streamlined at 4:10, and it's awesome, the band getting even heavier somehow, the slow parts absolutely punishing, while “Voices From The Depths” is a highlight with its sheer power, although, truth be told, these songs more or less pound together into one death-doom monolith. I love “Premonitions” and its grinding and blasting, a very welcome touch by the album's midpoint, and it shows how Ungodly Rest handle those tempos with as much ease as the lower and slower ones. “Delirium Of Death” and “Drowned Into Illness” continue the death-doom torture to the album's conclusion, and I'm left wanting a bit more personality and something to remember these guys by but am nonetheless very impressed by the sounds here.

Of the 10 tracks, fully four of them are to my ears expendable, intros, outros, interludes... man, I just wanna hear Ungodly Rest crush, and crush they do in the other six cuts. There's some work to do yet, but this is still recommended.