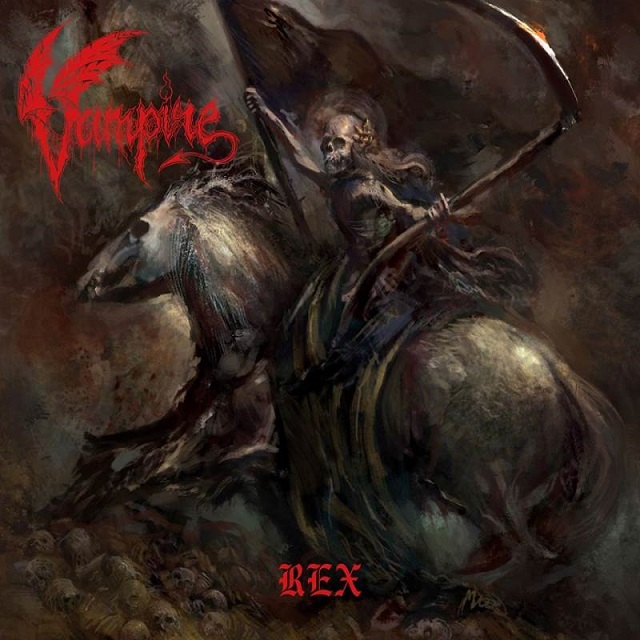 Sweden’s Vampire returns from the coffin with their third full-length Rex, a furious dose of death/thrash with supreme guitar soloing and unrelenting speed.

Clocking in at a sound 39 minutes, singer Hand Of Doom sounds possessed with his throat-ripping vocals and adds character to these odes that deal with horror, death, and the mythological. “Inspiritus” hold an early thrash/NWOBHM vibe and aside from the vocals, musically could fit on Metallica’s Kill ‘Em All. What separates Vampire from their contemporaries is their ability to fit in melodic, twin leads to off-set the razorblade, manic tempos.

The album cover perfectly illustrates the mood of the album, as it feels like a journey through a dark fantasy novel while having this volcanic, loud, death metal band as the soundtrack. “Moloch” is adventurous using acoustic guitars as a backdrop to the electric madness and features staggering riff and mood changes and sticks out as a highlight along with the incredible “Anima”. With a very unsettling vibe, this doom metal type track features the piano and very deliberate rhythm work akin to a death march of sorts. Comparisons will be made to fellow countrymen Portrait, especially due to guitarist Sepulchral Condor (gotta love these names!) being in that band and that King Diamond/Mercyful Fate influence in Portrait makes its way to Vampire with “Serafim” and also in the magnetic leads of the Jekyll and Hyde closer “Melek-Taus”. Highly recommended, listen now!