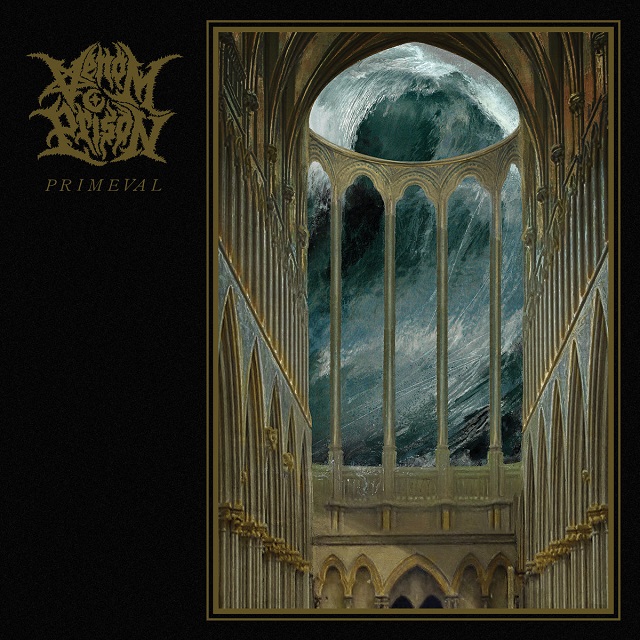 UK death metal heavies Venom Prison made quite a splash with their debut, 2016’s Animus, and since last year’s follow-up, Samsara, decided to go back and re-record an early demo and EP and repackage it with a couple new songs, which is what we have here in Primeval. The first five songs are the band’s 2015 Defy The Tyrant demo and it doesn’t take long to realize that the band’s material was always as good as it was on Animus, these five songs the sound of a band who were pretty alarmingly confident and strong from day one. Although I’m not always interested in hearing bands re-recording material, here it’s a pleasure, the tinny production and tone of the original being replaced with that huge Venom Prison sound, and the songs benefit from it, although they may lose a bit of the underground punk urgency that the original demo certainly had because, let’s face it, that’s always lost with a big, enveloping DM production.

Next up are the four songs from 2015’s The Primal Chaos EP, songs like the sludging “Daemon Vulgaris” really gaining from the massive production promotion. Again, you wonder if the original’s production gave the songs a bit more of a human touch, but there’s no question that the new take on the songs has more sonic appeal than the treble-heavy and considerably thinner sound on the original EP. Primeval ends off with two new songs, “Defiant To The Will Of God” and “Slayer Of Holofernes”, both of which show that while Venom Prison haven’t changed their sound much since their first two releases, they have refined it and become more confident and more powerful, the latter tune showing particular skills balancing melody, blasting, and open space. These two songs are as good as anything off their latest full-length and prove their next will be another winner.