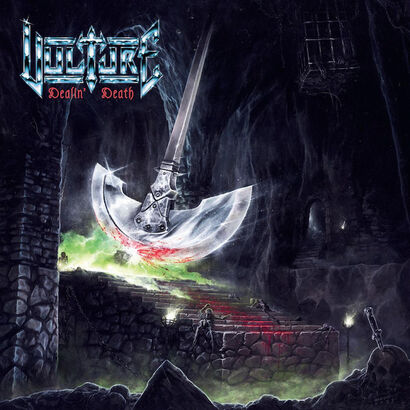 Third album from German thrashers begins with electrified acoustic guitar and the ominous horror movie creak of cello introducing a piercing scream begun "Malicious Souls". This riffing, all out speedster of an opener is the exception. Nor is the platter comprised of smooth throat intonations. In fact, the off-kilter vocals of Leo Steeler encompass a range of demented/psychotic emotions, similar to those exhibited by the protagonists in the nine accompanying songs (including tales inspired by Poe, the Greek myth of Medusa, ghosts and a certain, nefarious, ancient Roman dictator), ie shrieking, squealing, gnashing teeth, the odd low, guttural growl and high pitched shouts. All the lyrics are in English, albeit, at times, barely discernible. Gang vocals, come the chorus, a snippet of classical piano is employed during infectious paced "Gorgon", recounting the dangers of Medusa: "Shun her fatal glare, the force of wicked eyes will leave you fossilized". Nice!

A lo-fi (raw?) production, courtesy of Stallion guitarist Alexander Stöcker, fits the album's old school frenzy. Much like the vaunted 80s Harris Johns recordings, this is hardly a collection to stand around, sip beer and discuss, but rather music to move to: launch one's self airborne, off the coach and break the lamp/end table, on landing! Quick hitters, all: none cracks the six minute expanse and several clock in under 4:00.

Even without the falsetto, "Star-Crossed City" conjures up an early King Diamond vibe. "Flee The Phantom" ups the ante once again, with that (almost punk) rolling down the staircase rhythm, while a slower stomp greets "Below The Mausoleum". Alongside the lead-off, the other "most genuine" retro number is the title cut, complete with some Nasty Ronnie (Nasty Savage) higher register warbling accentuation. Closer, "The Court Of Caligula" rides a bouncy, mid-tempo beat that is a far cry from trash.

Back to the future.