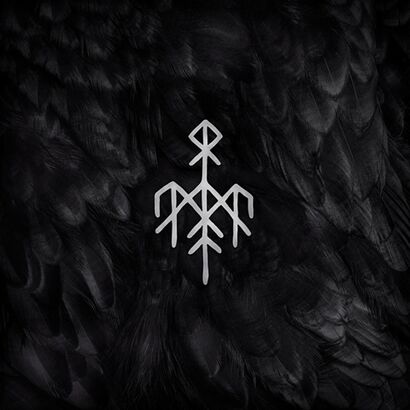 Wardruna enchants us once again with Kvitravn, their fifth full-length studio album, set to release on January 22nd. They succeed masterfully in making music here in modern times that touches something infinite and primal at the core of your being, music that is stirring and deeply affecting. Their sounds, rhythms, and chants transport you to places you have never been, but somehow know intimately. All at once you are connected to nature, to the beating hearts of everyone around you, and if the earth itself has a pulse this is what it would sound like. Kvitravn from start to finish is an immersive and sonically seductive experience.

Woven through with Norse traditions and lore, various symbols and signs will be recognizable like old friends, and lesser known representations of them will soon become familiar. The album title Kvitravn (white raven), which is also lead artist Einar Selvik’s alias, is one of these lesser known symbols. Odin’s ravens Hugin and Munin (Munin, or “Memory” being the name of a track on the album as well) are normally depicted as black, so the white raven is something rare and special.

The album opens with “Synkverv” (Turn-sight), which sounds like an invitation, a beckoning, its steady and relentless drum beats with uplifting vocals and the magical sounds of the lyre throughout sets the pace for the journey on which you are about to embark.

The title track “Kvitravn” follows, and features some of the most spellbinding singing on the album, showcasing the vocal virtues of Selvik and Lindy-Fay Hella. The song begins with the sounds of a bird calling, water, and wind. We are soon treated to the haunting sounds of the tagelharpa which weaves a continuous pattern throughout the song, as the vocals, drums and other instruments are all layered over top. Each instrument has its moment to shine, and nothing ever sounds out of balance. Even without the spectacular visuals of the video that accompanies this song, the song manages to emulate perfectly the bird’s eye view of soaring over the harsh beauty of the landscape below.

"Grá" (Grey) is the shortest on the album, but extremely impactful. The drums set a faster pace and there is a wild and feverish quality to Lindy-Fay Hella’s vocals here, she totally unleashes her vocal fury and the effect is hypnotic. You’ll be humming along for a long time afterward.

The aptly named “Ni” (Nine) is the ninth track, which has great significance to Norse mythology - there are nine worlds in the Norse cosmos, Odin hung for nine days from the tree Yggdrasil in order to learn the significance of the runes, and several more. The track offers a comparatively spare and unembellished sound, relying more on Selvik’s voice and allowing it to ring out.

Closure “Andvevarljod” (Song Of The Spirit-Weavers) is a powerhouse of a song. The vocals are epic sounding and burst from the singers with an unrestrained energy. Soaring and hopeful, the sound resonates well after the last sounds fade, and leaves you with an uplifted feeling.

Living in the chaos of the present world, where we are more and more dependent on technology as a means to keep and maintain our ties to each other, and where we venture everywhere masked and anonymous, musical moments like this are a gift, a welcome invitation to return to something that feels like real connection.